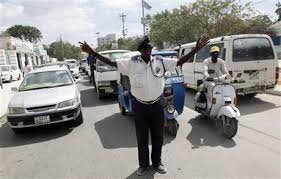 A thorough traffic and law enforcement mobilization of operations in a crack down nabbed at least scores of public services transport operators and other vehicles that were either fined or jailed for breaking the rules and regulations.

The police officers descended upon the drivers in a move to instill discipline and bring back sanity to city highways and roads that have been choked by traffic jams, unnecessary road obstructions by un-minding drivers, congestion along the road packed by hawkers, numerous accidents, speeding vehicles.

The operation was led by no other than the deputy police commissioner, Brig General Abdirahman Liban and Chief traffic enforcement Commander Col. Faisal His Elmi, both of whom said that the crack down will continue until road rages and carnages are curtailed.

The move comes after the National Police Commissioner, Major General Abdilahi Fadal Iman announced on Wednesday the start of the crack down on unworthy vehicles, speeding vehicles and associate flouting traffic regulations, following the death of 13 year old pupil one of the ELM schools over the week while being on board on school bus on their way home.

Despite the fact that Major General Fadal taledd of vehicle road worthiness check and re-examining skills of bus drivers, it is worth noting that the int’l standard regulating public service vehicles (PSV)-thus buses, mini buses, and taxes have not been established in the country.

Similarly, systematic vehicle check units of ( and on) annual basis subjection and verification is still absent.

Whatever the case the government has made huge steps in managing monumental tasks in its limited way quite magnificently to see to it that all is well in our traffic law enforcement services.

A major problem that has yet to be reviewed is the crude allowance of having the right-hand steered vehicles plying the right-side lanes along our roads today.