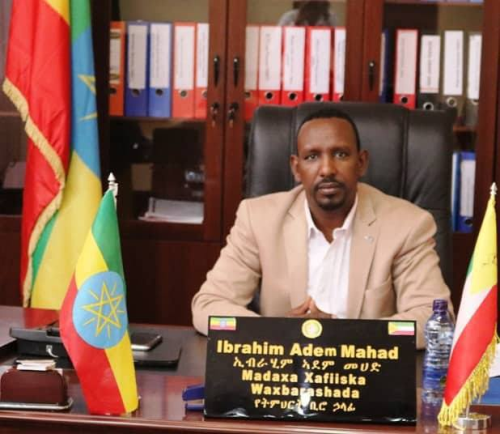 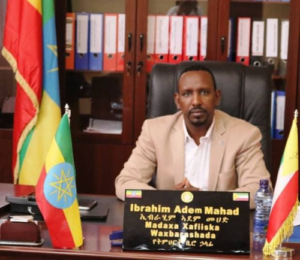 HARGEISA–The two ministers of Ethiopia’s Somali region which Somaliland arrested at Egal airport on last Tuesday are said to be a close ally to the deposed leader, Abdi Iley.

It has become clear that Somaliland apprehended the minister for education, Hon. Ibrahim Adan Mahad and the Justice minister, Abdi Jamal Ahmed Qalombi is that they are implicated of instigating the unrest that engulfed most of the townships in the Somali region.

The two ministers who are behind bars in Somaliland were among the 9 members expelled from the executive committee of the ruling party of Ethiopia’s Somali region.

The Federal Govt of Ethiopia is said to have been keeping on watchful in regard to the whereabouts of the duo.

The Justice minister, Hon. Abdi Jamal Ahmed is a next of kin to Abdi Iley, the former leader.

He is believed to be the ringleader who instigated the riots and looting which is also blamed to be carried out by Heego, a youth group that was solely responsible for the atrocities that transpired in the region

Heego was founded by the ex-president, Abdi Mohamoud Omar a.k.a Abdi Iley and carried out the inhumane and despicable crimes against the populace.

The Justice minster tortured people while he was in charge of justice affairs and prisons.

He used to subject gross human violations against the populace.

One of the ministers in police custody is reported that part of his family live in Hargeisa as they built a house.

The Federal Govt is said to have made intelligence contacts with Somaliland authority in order to nab former officials in the Somali region who are implicated much of the human violations that occurred in the region.

Most of those implicated such atrocities are on the run fleeing from persecution from Ethiopia’s law enforcement agencies. That is why Somaliland has arrested the two fugitive ministers from Ethiopia’s Somali region after they have sneaked into the country and tried to board a plane heading to Nairobi, Kenya’s capital. Somaliland will extradite the two ministers to Ethiopia and hand over the Federal authorities to persecute them against the crimes they have committed.