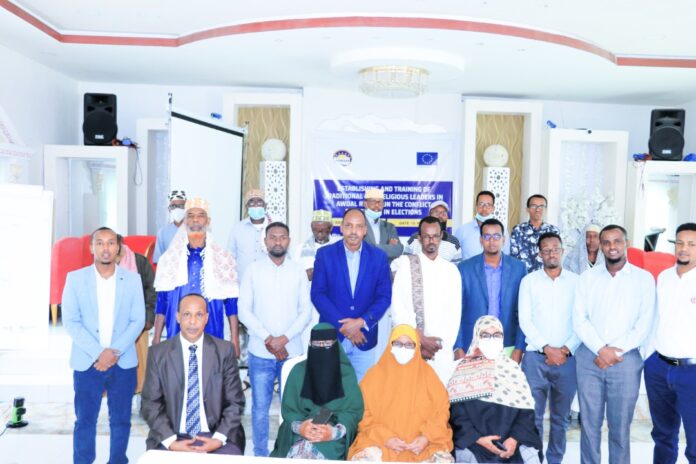 In the run-up to the May 31st, 2021 parliamentary and local council elections, Somaliland Non-State Actors Forum (SONSAF), organized a two-day workshop on electoral dispute resolution and prevention targeting traditional and religious leaders, civil society organizations which are part of the election monitoring committee as well as the intellectuals were in attendance. The workshop which commenced in Borama, Awdal’s provincial capital yesterday with the aim of educating the participants on the resolution of electoral dispute and ways to prevent it.  The first day of the workshop was officially opened by the chair of SONSAF, the Mayor of Borama, and the chair of the electoral monitoring committee of Somaliland. In his remarks during the opening of the seminar, SONSAF project Coordinator, Hasan Shukri, said that the training will last for two days. He clarified to the participants that the mission was to be part of resolving disputes that arise during the various stages of the elections in Somaliland. He informed the attendees that they will be tasked to deal with election conflicts that might happen prior to polls, during the elections and after the elections are over which may be about six months. Mr. Shukri reiterated that SONSAF in conjunction with the EU will set up an election situation room which is the first of its kind to be established in SL since its inception in multi party politics. The office is designed to collect information pertaining to the upcoming parliamentary and local council polls in Somaliland. The Chair of Election Monitoring Committee, Kamal Hasan Isak together with chair of election monitoring committee in charge of Awdal province, Mr. Siyad Omar Ali. Siyad urged the participants to benefit from the workshop as they will be given lessons aimed at dealing with election disputes. Kamal Isaq said that the election monitoring committee are based in all regions in Somaliland but each and every election monitoring committee has been decentralized to be operational in its region. He pointed out that the committee tasked to observe elections in regional levels are independent and will not side with any particular faction. He went on to say that the first task is to raise awareness to the public on the root causes of the conflicts during polls. He urged the participants to immediately report any conflict to the election situation room. 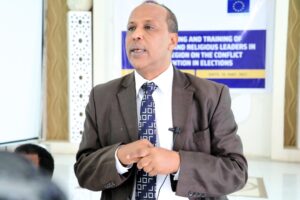 SONSAF Chair, Anwar Abdirahman Warsame, announced that the workshop was officially opened. Anwar said: ” It is a great opportunity to organize the workshop in all regions of Somaliland. Borama has been chosen to host the launching of the workshop on election conflict prevention.” He stated that a final report will be written based on the information that is gathered from all regions in Somaliland which later will be shared with the int’l community. He added that the final report will clarify of the elections will be free and or if the elections were rigged and marred by irregularities. In his remarks, the mayor of Borama, Mr, Hadi, said that our mission is to report if the elections will take place smoothly and to report the constraints that arise during the polls. He urged the participants to return back to the public pertaining to the lessons learnt from the seminar.