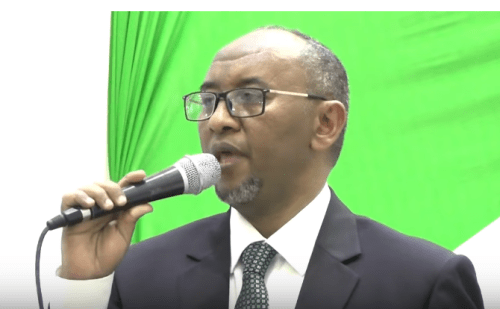 Hargeisa- The former minister of the presidency under President Ahmed Mohamed Mohamoud (known as Siilaanyo) launched a memoir on Friday.

Hersi Haji Ali Hassan, who was seen by many as the de facto president of Somaliland, served under President Siilaanyo from 2010 to 2015. In his book, Hersi said the president suffered dementia. After he realized his ill health immediately after the inauguration in 2010, Siilaanyo wanted to resign, Hersi recalls. The First Lady became closer to power and assumed increasing roles, Hersi said in the book. Hersi left from his position among other ministers in 2015 after the First Lady sided with the current president Muse Behi to run for the presidency. Hersi was a strong opponent of Behi and preferred former cabinet minister Abdiasis Mohamed Samale to run for the ruling party, Kulmiye. The unexpected exodus of 9 senior officials including foreign and justice ministers who collectively resigned was spearheaded by Hersi who was shocked by the fact that the First Lady backed Muse Behi, the then chairperson of the ruling party, Kulmiye.

The book titled From Bush to Presidency is based on a personal journey of a man not known by the public but later became the most powerful politician after he was given a prime ministerial role in 2010. As the chief of cabinet and later the minister of the presidency, Hersi was the man in charge of the country, apparently using the powers of the ailing president. In the book, Hersi discussed the first time he learnt that the president was experiencing dementia. “On the early morning of 30th August 2010, a frightened First Lady called me and told me that there is a new development and asked me to come {to the presidency}. I left while terrified and reached the presidency still terrified,” Hersi said in the book. Mohamoud Hashi Abdi, the then minister of aviation who later became minister of the presidency to replace Hersi, joined the meeting, Hersi said. The First Lady told the two trusted ministers who belong to the clan of the president that the president realized that he is losing memory and decided to resign.

President Siilaanyo was sworn to the office on 27th July 2010, meaning he was in office in a month at the time of the meeting Hersi said, “the president changed his decision after the family discussed.” The situation of president Siilaanyo was an open secret. But the confession of Hersi raised questions. If a president is unable to fulfil his duties for ill-health, he/she has to vacate the office, according to article 86 of the Constitution of Somaliland. From the accounts of Hersi, Siilaanyo has been struggling with dementia from the first month of his presidency. The book is widely discussed in social media and raised questions.