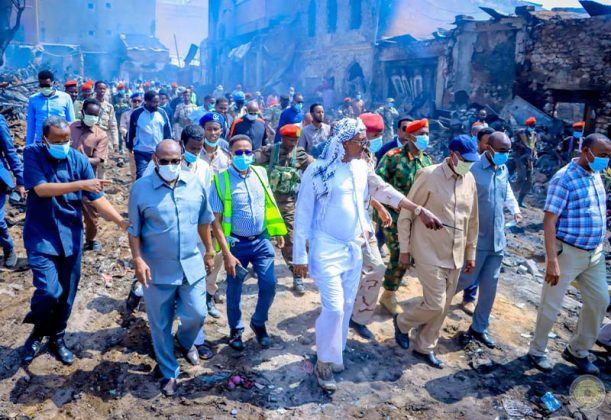 Somaliland President Muse Bihi said on Saturday that no deaths were reported in Hargeisa market fire and 28 people were sustaining non-life threatening injuries.

Bihi visited the market on Saturday morning after firefighters managed to contain the blaze that started on Friday evening and continued to spread at a breathtaking speed for multiple hours.

Speaking to reporters, he pledged $1 million for efforts to mitigate the impact caused by the fire which has left apocalyptic scenes in largest market in the break-away state. Muse Bihi also heaped praise on the city’s authorities, firefighters and troops who had taken part in the efforts to put out the flames, expressing hope that the region would be able to rebuild the market.

Mayor of Hargeisa Abdikarim Ahmed Moge said the flames could not be extinguished quickly on Friday night due to the densely-packed nature of the market and crowds of people who rushed to the area.

Videos circulated online showed an inferno engulfing Waaheen Market as people scrambled to recover their possessions, the worst fire to hit the city in recent history.

US ambassador to Somalia Larry Andre spoke with Bihi about the devastating fire, according to US embassy in Mogadishu.

“We are relieved no one was seriously hurt. We are confident the Somaliland people and their leaders will achieve a full recovery,” the embassy added.

Prime Minister of the United Kingdom Boris Johnson said his government would do its best to support Somaliland authorities in reconstruction efforts.

“Saddened to see the aftermath of the fire in Hargeisa with such destruction in the market that is the economic heart of the city, affecting many small and family enterprises,” he tweeted. “Your city will rise again and the UK will do what we can to support Somaliland’s rebuilding effort,”.