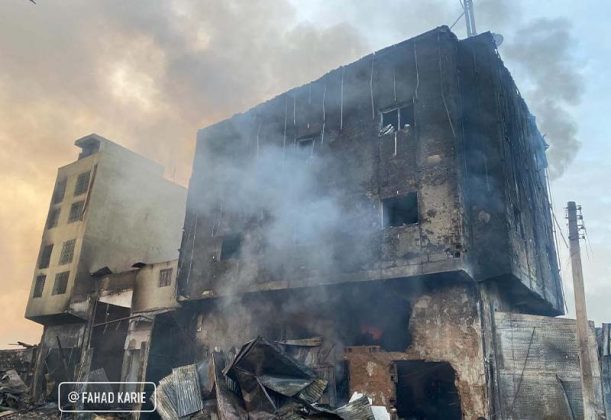 A Massive fire swept through Waaheen Market in Somaliland capital Hargeisa on Friday night, destroying thousands of shops and causing millions of dollars worth losses, in the worst blaze to hit the town in recent years.

Videos and images circulated on social media showed a blaze tearing through Waaheen Market. Flames and smoke billowed over the market as people scrambled to recover their possessions.

The blaze started at about 8:00 PM and raged through Saturday morning despite hours-long efforts by fire fighters to put out the flames. Thousands of residents, officials and troops rushed to help local authorities control the blaze which was spreading with breathtaking speed.

Hargeisa municipality was yet to determine the cause of the fire.

Mayor of Hargeisa Abdikarim Ahmed Moge imposed a curfew on the market and said crowds rushing to the area significantly impeded efforts to control the spread of flames and urged residents to stay at their neighborhoods.

Somalia’s President Mohamed Abdullahi Farmajo, his Prime Minister Mohamed Hussein Roble and opposition leaders in Mogadishu said they were grieving with the people of Somaliland who lost their property in the inferno that had engulfed Waaheen Market.

Waddani Opposition Party leader Abdirahman Irro, speaking after an inspection tour to the market said, earnings by businesspeople in Somaliland since 1991 had been reduced to ash.

Ethiopia’s Prime Minister Abiy Ahmed said he was saddened by the massive fire at the main market of Hargeisa and that his thoughts were with the people of Somaliland who were affected by the tragedy.