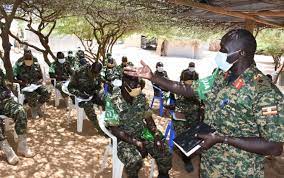 The United Nations Security Council on Thursday unanimously approved a new AU peacekeeping mission in Somalia – the African Union Transition Mission in Somalia (ATMIS) after the mandate of AMISOM expired on March 31.

“Through the resolution, the Council endorsed the decision it made with the African Union Peace and Security Council to reconfigure AMISOM into the African Union Transition Mission in Somalia and authorized – for an initial period of 12 months – African Union Member States to take all necessary measures to: carry out the mandate of reducing the threat posed by al-Shabaab; support the capacity-building of the integrated Somali security and police forces; conduct a phased handover of security responsibilities to Somalia; and support peace and reconciliation efforts in that country.”

African Union peacekeepers will operate under the name ATMIS for another 33 months during which they are expected to carry out joint operations against Al-Shabaab with Somali security forces. The UN Security Council authorized AU to maintain about 19,626 uniformed personnel until 31 December 2022 and scale down the number to 17,626 between January 1 2023 and March 31 2023.

In the statement, the Security Council said conclusion of the electoral process will “help progress national priorities and support transition from international security support”, and called on Somali authorities to assume greater responsibility for the national security.