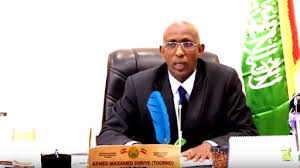 A senior officer in Somaliland education ministry has been fired after he was accused of allegations that he was responsible for the spread of Christianity in Somaliland.

Mr. Abdilahi Yasin Derie, the director of Curriculum, is involved with the crime that he allowed Christian lessons to be taught which our Islamic religion strongly opposes against it.

He is also facing allegations that he informed school authorities to go ahead with the teachings of Christian lessons to the students at local schools.

The minister has promised to sue the director at the court.