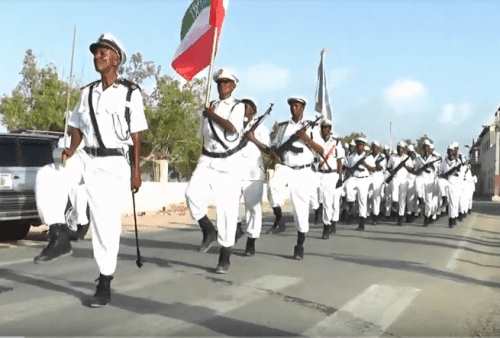 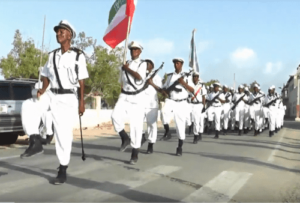 BERBERA– Somaliland’s Marine Corps marked its 23rd anniversary on October 10 since its inception. The event which was colorful kicked off with the march of the band group. The objective behind the marking of Somaliland’s coastal guards is to showcase its capability of protecting its territorial waters. Somalia is faced with years of piracy  threat but having Somaliland built its marine corps that its waters are safe from any threat from piracy acts. The coast guards have exhibited their new equipment and the ceremony marking its establishment saw the attendance of its chief, Admiral Mohamed Hussein Farah “Hiirane”, members of Somaliland cabinet ministers, Sahil regional administration authorities and agencies that have working relations with the country’s marines. This is the day where we showcase the coastal guards achievements over the years and is mean to assess the accomplishment said the Admiral Mohamed. 50 coastal guards are currently studying in overseas and urged the ministry of finance to allocate the funds intends for the marines. It is reiterated that the coastal guards play a huge role in maintaining country’s security and combating piracy in Somaliland shores. Minister who spoke on behalf of the government promised to build the guards and provide its needs. Somaliland’s coastal guards have security the safety of its waters from piracy threat in contrast with Somalia waters where piracy is prevalent.