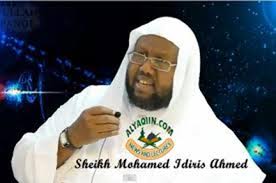 The Somaliland government on Sunday has officially announced that it has not halted a sermon that the radical cleric, Mr. Mohamed Idris, who was departed from the US to hold a public lecture in Hargeisa. But the government has stopped the go ahead of training on how to achieve a happy marriage. The training which the Somali radical cleric was to host in Hargeisa is no longer taking place where people were supposed to pay fees for participation the event.

Marodi Jeh regional governor, Mr. Jama Ahmed Abdi has reiterated that the govt has not halted any public lecture. Mr. Jama has revealed that they only stopped a seminar which was posted on social media. The RG has told that anyone who is interested to hold a seminar must contact the institutions concerned so that he will be given the go ahead to host the event in Somaliland. The governor has stated that the govt has not interfered in public lectures and mostly are held in mosques but we have banned the seminar which is charging people of fee for participation. The Somali radical cleric who was deported from the US is against Somaliland to secede from Somalia and has made clear that his stance is for Somalia unity. The RG has responded that cleric is known to preach in mosques but SL government cannot allow him to hold workshop in Hargeisa which he is staunchly against.