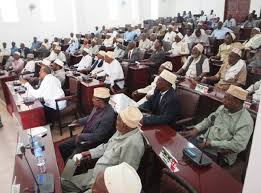 A member of Somaliland’s house of elders, Mr. Nur Rayale Khaire, has confirmed the creation of an armed insurgency in Awdal province. The parliamentarian who is elected from Awdal region has made the confession during house of elders session whilst debating on the national security of Somaliland. The MP has further disclosed that during the participation of Somaliland president, H.E Musa Bihi Abdi on Amoud graduation ceremony last week, it coincided with the arrival of new insurgency group established in Awdal province. The parliamentarian has called that the security forces detained local councilors and further urged the government to review on the political scenario of the province. Mr. Nur has revealed that the policies that certain politicians hailing from Awdal region are impacting on the national security and peace of the country and called on the government to take the right actions. During the former administration headed by Silanyo, Awdal region saw the formation of an armed rebel group led by Sultan Wabar. Now the government of president Bihi is dealing with the insurgency led by the renegade Colonel Said Aare which established its base in the mountainous areas of Erigavo.