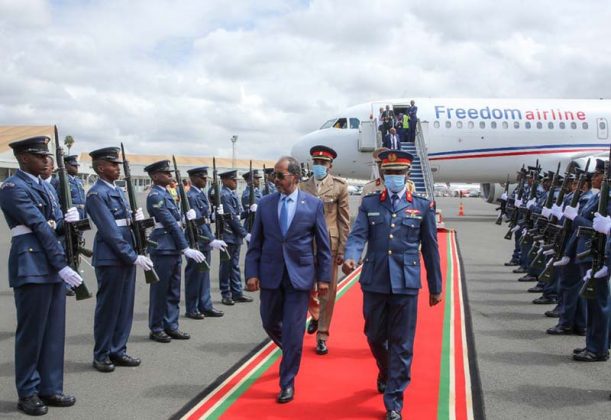 Mohamud departed Mogadishu’s Adan Adde Airport on Friday morning, just days after returning from a visit to Eritrea where he had met with Eritrean ruler Isaias Afwerki and signed a memorandum of understanding.

“At the invitation of H.E Uhuru Kenyatta, I have today traveled to Kenya on an official state visit where I will hold talks with my counterpart on further strengthening bilateral cooperation & relations between the two sides for the mutual benefit of our two peoples & nations,” Somali president tweeted.

It’s his second visit to an African country since his election in May. He earlier visited Eritrea where thousands of Somali troops had completed a clandestine military training.

During his stay in Nairobi, Somali President is expected to sign a deal with Kenyatta on the resumption of Kenyan khat imports to Somalia, years after the previous government of President Mohamed Abdullahi Mohamed – better known as Farmajo – suspended miraa flights from Kenya.

He is also due to discuss with Kenyatta efforts to mend strained relations between the countries as he sees Kenya a key partner in his administration’s stabilization and development agenda. Kenya has thousands of troops in Somalia, who are taking part in the fight against Islamist insurgents.

In a speech at Mohamud’s inauguration last month, Kenyan leader Uhuru Kenyatta said Somali President could count on Nairobi as a “dependable partner” in his development agenda.

His visit to Kenya has arrived after ties with Ethiopia – Horn of Africa’s anchor state, which also contributes troops to African peacekeeping mission in Somalia – plummeted to their lowest point in decades. Ethiopian Premier Abiy Ahmed, a staunch supporter of Farmajo, was irked by Somali President’s appointment of Hamza Abdi Barre as Prime Minister.