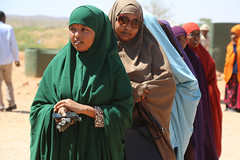 Beletweyne, 21 April 2019 – HirShabelle State has launched the second phase of its police recruitment programme with the enlisting of 200 youths from Hiran region.

The exercise was conducted in Beletweyne by Somali Police Force and African Union Mission in Somalia (AMISOM) officers.

“We have a very good number of recruits, most important, we have a good percentage of women and they will be going in for medical checkups and other tests conducted by AMISOM Police,” said Superintendent of Police (SP) Philemon Dantim, AMISOM Police Team leader in Beletweyne.

Of the 200 youths recruited, 125 are from Hiran region, while the remaining 75 came from Middle Shabelle region.

HirShabelle State plans to recruit 800 police officers under a grand programme supported AMISOM, European Union and the UK Department for International Development. The current recruitment comes two months after the graduation of the first batch of police recruits who have since been deployed to various parts of HirShabelle to maintain law and order.

SP Dantim noted that the recruitment and training exercise was aimed at establishing a strong police force capable of securing the region once AMISOM exits.

Hiran Police Commander, Isak Ali Abdulle, said the recruits were selected not only on the basis of clan and regional representation but also on merit.

“The recruits comprise both male and female. They were selected based on their merit. We allowed the clans to share the numbers so that we establish real federal police and not one from a particular clan,” said Mr. Abdulle.

The youths were recruited from the districts of Belet Weyne, Mataban, and Mahas. Recruitment from other districts, mainly Bula-burde and Mataban, is planned for the 24th and 25th of this month.

The recruits expressed their joy in joining the police force, saying they were ready for the three-month intensive training to be conducted by AMISOM officers.

“I am pleased to be one of the new police recruits for HirShabelle State. [I am ready] to serve my region and apply what I learned so as to develop the state,” said Nasro Mohamed Elmi.

Her sentiments were echoed by Urur Abdulle Mumin who said he will use his skills and education experience to contribute to the development of HirShabelle.

Their colleague Yusuf Muhumed Mohamed added that it will be an honour to serve his community as a police officer.

“The reason why I decided to join the police is due to the need for this region to have a trained police force that will effectively serve the community and meet needs of the residents,” said Mr. Mohamed.