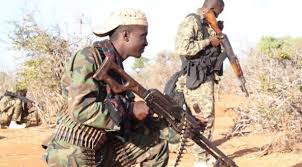 The Somali army officials in Bardhere told local press that they launched an attack against Al shabab stronghold positions after getting information from local residents.

Residents gave hints to the Somali army after the militants coerced them to pay hefty taxes.

The Somali force conducted an operation in the aftermath which led to the killing of six militants.

The militants burnt two vehicles belonging to Somali army during the skirmishes.

the Somali army intensified its operations which are aimed at flushing Al Shabab from Gedo region in support of local population that provide militant hid outs.