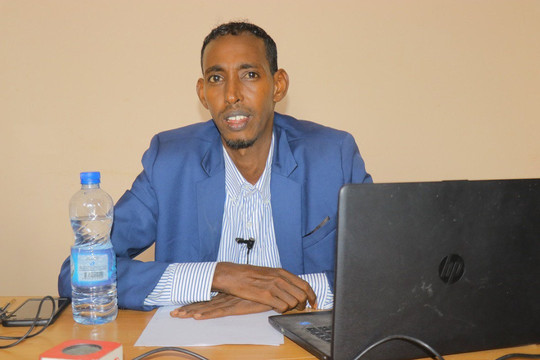 The Puntland authorities have today released journalist Ahmed Sheikh Mohamed – who had been held under arrest accused of defaming the police since October 17 – after it was revealed he had been forced in to making a confession.

The International Federation of Journalists (IFJ) joined its Somali affiliate, the National Union of Somali Journalists (NUSOJ) – in condemning the coercive methods used by Puntland authorities to obtain a false confession of criminal activities.

Ahmed Sheikh was accused of serious criminal offences such as threatening public officers, insulting authorities and institutions, and corruption. These groundless accusations came after Ahmed reported on Radio Daljir that the security guards of the head of police had tortured and killed a prisoner.

According to reliable sources consulted by NUSOJ in Garowe city, authorities threatened to imprison Ahmed for life but promised to release him if he confessed he had defamed and insulted Puntland’s police and testified against Radio Daljir for the above mentioned report. He initially refused to confess, but finally accepted the prosecutors’ demands and recorded a confession video that was later disseminated by authorities.

NUSOJ General Secretary, Omar Faruk Osman, said: “The Puntland authorities are desperate to justify their vicious attacks on media freedom. The confession video of Ahmed Sheikh Mohamed illustrates how far Puntland authorities have violated Ahmed’s right to the presumption of innocence as well as the right not to be forced into incriminating himself, his colleagues and Radio Daljir.”

The IFJ and NUSOJ have widely condemned and reported on the growing media crackdown in Somalia, where authorities are blocking access to media, have imposed restrictive measures on the press and raided media, among other attacks on media freedom. It is believed that the coerced confession will be used by authorities to spread propaganda against Radio Daljir, an independent radio station.

IFJ General Secretary, Anthony Bellanger, said: “We condemn the continued attacks on media freedom in Somalia and urge the Puntland authorities to stop harassing and threatening media workers. We stand in solidarity with Radio Daljir and all the media outlets that are suffering pressures from authorities to stop reporting freely. You are not alone“.