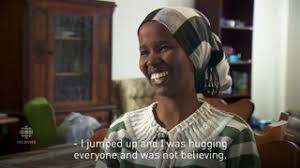 A jubilant Ruqia Wehliye was at the Saint John Airport surrounded by family for the first time since she fled Mogadishu, alone and scared, in 2009.

“One person gets 10 people? God is great!” the Somali refugee said after she first laid eyes on her nephew, his wife and their eight children, ranging in age from 20 to a toddler.

They’d been torn apart for at least 16 years, a consequence of the civil war and violence that has displaced more than two million Somalis over the past two decades.

Wehliye, now 30, escaped to India as a teenager, after her father died. She said she has never seen her mother and presumes she is dead. 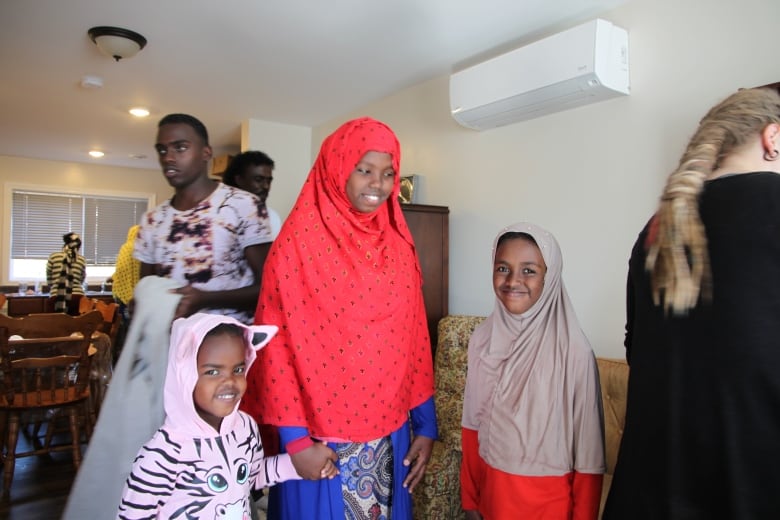 She learned to speak English, working as a housekeeper, and had hoped to stay in New Delhi.

But as an undocumented person, her bid was denied.

“The smugglers took away my passport,” she said.

Eventually, she made her way to a United Nations High Commissioner for Refugees office and applied for refugee status.

Ultimately, she was accepted and assigned to come to Saint John in November 2017, where she said she’s been living with no connection to any surviving relatives.

Wehliye’s nephew, 37-year-old Abdallah Muhammed Hassan, was also separated from his wife and children after a 2008 attack on their family compound that killed Hassan’s father, mother and brother.

“When I came back home, I couldn’t find anyone,” he said.

The story of his journey to find his own children in the sprawling Nakivale refugee camp west of Kampala would have taken hours to unspool, but Hassan was happy to focus on his discovery of his aunt in a city where he can sleep at night. 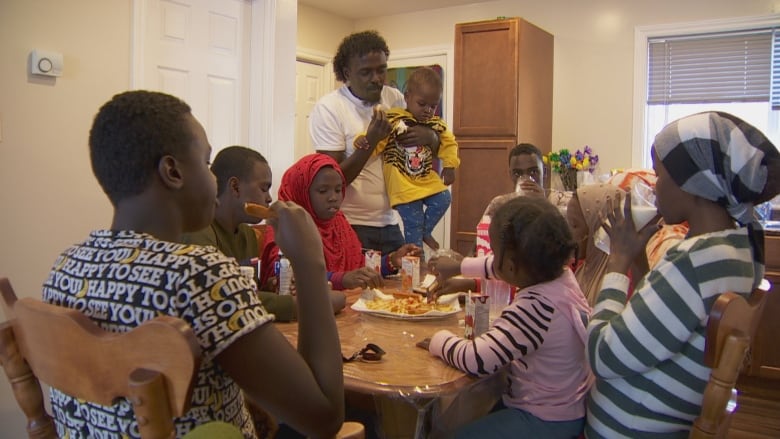 Wehliye and the Hassans’ assignments to Saint John, by Immigration, Refugee and Citizenship Canada, were utterly random. (Mike Heenan/CBC)

Their shockingly coincidental assignments to Saint John, by Immigration, Refugee and Citizenship Canada, were utterly random, they later learned from settlement workers at the Y.

“The gate when it opened, I saw Ruqia in front of me, coming. I said, ‘Is it true … true …  true … true,” said Hassan, recalling his airport arrival.

“I started touching her face. It was so amazing to see her.” 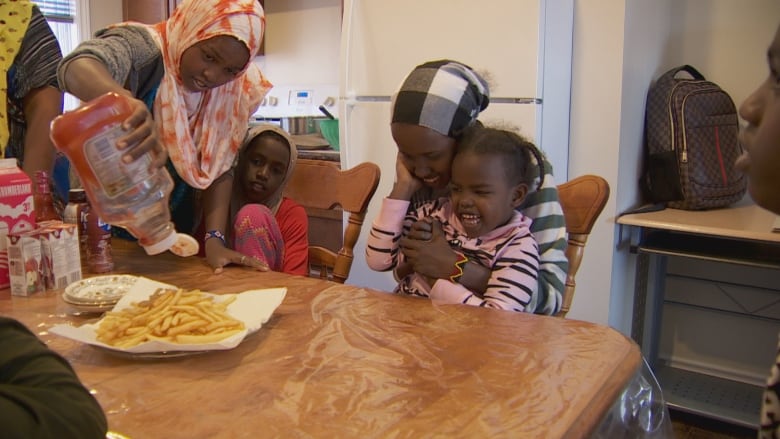 Wehliye said she got a feeling that something wonderful was going to happen when she was asked by the YMCA to help interpret for a family of 10.

She asked to go the airport to greet them and in the car on the way there, she asked a Y employee for a name.

She said she was told she’d be meeting Abdallah Muhammed Hassan.

“And Muhammed Hassan is my eldest brother — my father’s eldest son,” said Wehliye.

Welliye screamed in the car and started to feel real hope, she said.

Then when she saw Abdallah, the oldest son of her oldest brother, she recognized him and his wife, Fardowsa, even though she hadn’t seen them since she was about 14.

“I jumped up and I was hugging everyone,” she said.

In a pile-on of coincidences, Shilo Boucher, president and CEO of the YMCA of Greater Saint John, happened to be on the same flight that brought the Hassans to Saint John from Toronto.

She said refugee families always get off the airplane last because their arrival, after an arduous journey, can be overwhelming.

“And as soon as they walked through the doors, Ruqia really got quite emotional and just ran to them, and I think everybody in the airport was crying,” said Boucher. 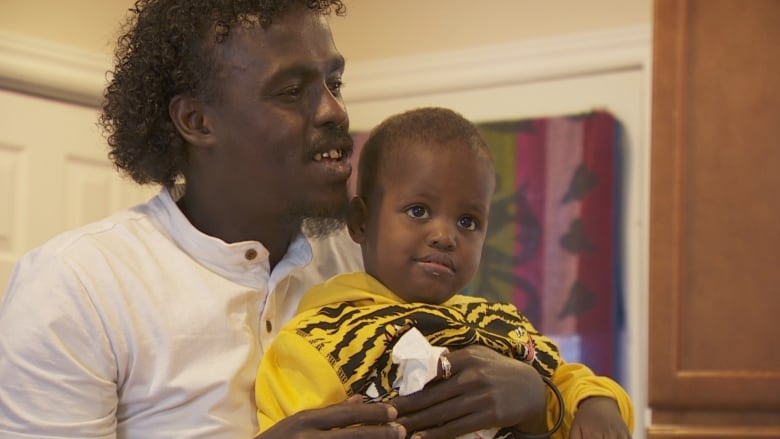 The 37-year-old Hassan was also separated from his wife and children after a 2008 attack on their family compound that killed his father, mother and brother. (Mike Heenan/CBC)

The Y helps settle government-sponsored refugees and also tracks where they go.

Boucher said she started seeing Somalis come to Saint John about four years ago, but she doesn’t know why.

Another eight families are due to arrive within the next six months.

“They’re not quite as big as the [Hassan family] but we do know we’re getting 47 people,” said Boucher.

Asked why Saint John, Boucher speculated that it may have to do with the city’s success when it comes to making refugees feel welcome and at home.

Boucher said there are now 493 refugees in Saint John and many are choosing to stay.

According to their records, the retention rate has increased from 85 per cent in 2016 to 88 per cent last year.

Boucher said anyone who wants to help the refugee community might consider donating to the furniture bank at the Lancaster Baptist Church.

She said volunteers are also welcome to join the First Friends program. 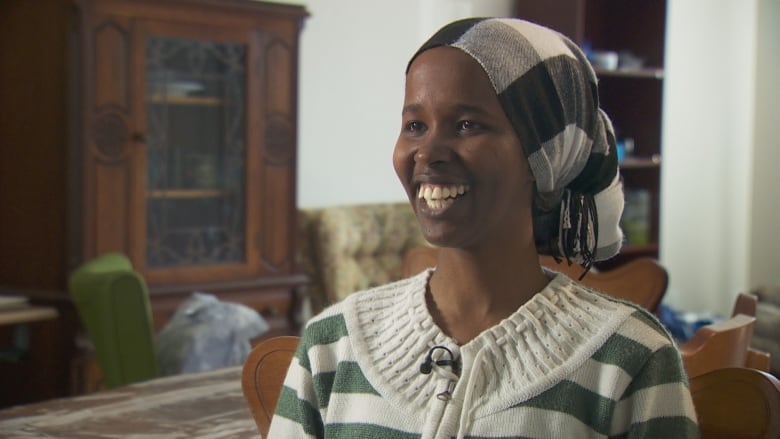 Wehliye left Mogadishu and Somalia for the first time in 2009, around the age of 19. (Mike Heenan/CBC)

“That’s really where a volunteer can come and meet the family and have a cup of tea with them and just be their Canadian friend and introduce them to their friends and build a network for them.”

Wehliye and Hassan said they plan to stay in Saint John.

The Hassans live in a five-bedroom house in the north end of the city, which is rented from Habitat for Humanity.

Hassan’s wife opens the fridge to show off the food inside, while the children put on boots to go play in the yard.

Hassan said it’s the happiest life he could ever imagine.

“I want to say thank you to all Saint John people,” he said.