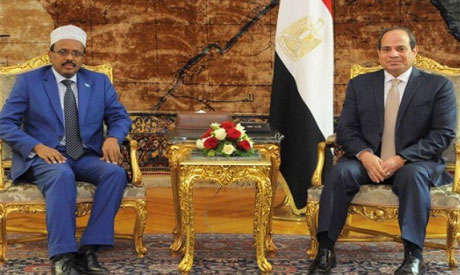 Egypt’s President Abdel-Fattah El-Sisi met on Tuesday morning in Cairo with his counterparts from Somalia and South Africa ahead of two meetings set to take place in the Egyptian capital today under the umbrella of the African Union (AU) to discuss the ongoing crises in Sudan and Libya.

The meetings on Sudan and Libya, which will be hosted later today by President El-Sisi as the current chairman of the AU for 2019, will be attended by the leaders of Chad, Djibouti, Rwanda, Congo, Somalia, and South Africa.

Also participating in the meetings on Sudan and Libya will be the chief of the AU commission, the Ethiopian deputy prime minister, the South Sudanese advisor for security affairs, as well as officials from Uganda and Nigeria.

After meeting the Somali president, the Egyptian President met with his South African counterpart Cyril Ramaphosa, where they discussed African affairs of common interest, according to Rady.

El-Sisi expressed to President Farmaajo Egypt’s keenness to boost bilateral cooperation and offered any support Somalia needs in its efforts to build up its institutions and ensure security and stability.

Meanwhile, the Somali president praised Egypt’s historical role in supporting Somalia and its efforts to help the country achieve peace and security.

The Egyptian president also met with his South African counterpart Cyril Ramaphosa, where they discussed African affairs of common interest, according to Rady.