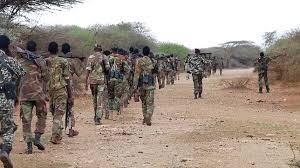 Somali army has seized areas under the control of the militant group of Al Shabab in Bardhere.

The flush out Al Shabab operation in Gedo region lasted for three days sand saw the national army to reclaim the control of Raydab and Daar Ma’alin areas from AL Shabab control.
The commander of the 49th Brigade of the 1st Battalion of the 43rd Division, Mohamed Weli Abdilahi Heris said that locals have complained to the army on Al shabab harassment including forcing them to pay extortion money.
The forces killed 10 militants of Al Shabab in the area yesterday and now is in full control.