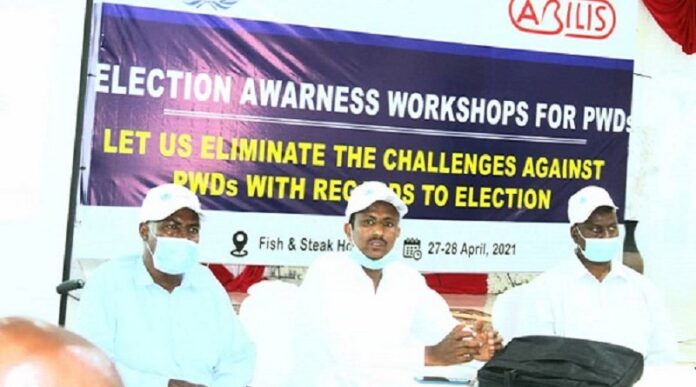 The 2 day workshop which was held in Hargeisa on April 27-28 was attended by the Director General of Somaliland Ministry of Employment Mr. Abdirashid Ibrahim, SNDF Board and management team, representatives of ABILIS Foundation, various disability organizations, government officials, and representatives of political parties.

In his opening remarks, the Executive Director of Somaliland National Disability Federation (SNDF), Mohamed Ahmed Essa highlighted challenges   that   impede   persons   with   disabilities   from participating in the electoral process.

“Somaliland National Electoral Commission (NEC) must ensure  that  during  elections,  polling  stations  are  made  accessible  to  persons  with disabilities  and  shall  provide  such  persons  with  the  necessary  assistive  devices  and services  to  facilitate  the  exercise  of  their  right  to   vote.  The NEC is therefore obligated   to   address   challenges   that   impede   persons   with   disabilities   from participating in the electoral process.” Mohamed Ahmed Essa, SNDF Executive Director said.

The Director General of Somaliland Ministry of Employment Mr. Abdirashid Ibrahim who also spoke at the opening ceremony of the workshop explained the election related challenges faced by people with disabilities living in Somaliland.

“People with disabilities living in Somaliland represent a large cross cutting portion of the Somaliland population. So when this large cross cutting portion of the Somaliland population does not participate fully in the electoral process, it prevents democracy from deepening and allowing these citizens a voice in the way they are governed.  Their  potential  is   not  being  tapped,  and  persons  with disabilities  (PWD)  continue  being  denied  their  human  rights  and  are  kept  on    the margins  of  society  in Somaliland.” Abdirashid Ibrahim, Director General of Somaliland Ministry of Employment said.

Other officials who also spoke at the workshop opening ceremony include; the leaders of the different SNDF Member organizations such as the Deaf and Blind associations.

Emphatically, People with disabilities living in Somaliland are not provided with a conducive environment in which they can vote, because the polling stations in the country are not accessible to wheelchair users. Another challenge is that polling stations have no temporary ramps for wheelchair users and there are no polling station premises with better pre-existing access for disabled people. Also staff trained to advise and help disabled voters during elections, as well as adequate lighting and support for visually impaired voters are not available in the country.