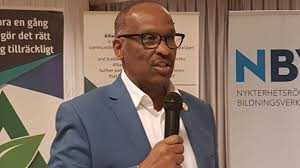 The education minister for the Federal Government of Somalia, Mr. Qodah Bare has suggested that Puntland state should allow students in the state to sit for the Somali national examination council exams.

The minister has argued that as per the set of examination rules and regulations, the Federal Gov’t has the overall authority to exercise general examination mandate.

Mr. Qodah said Puntland must sit for the national exams otherwise let Puntland regional state be self sufficient and not seek the national certificates.

The Federal Gov’t has spearheaded strict education system in the whole country and is set to roll out a new educational curriculum.

The Federal member state of Puntland has its reservations of united national exam.

The ministry of education of Puntland argued that the state has its own education system which has been in place since 2003 and is based on a policy and unique curriculum.

The examinations which are held in the fourth consecutive year in Banadir, Jubaland, South West, Galmudug and Hirshabele  with the except of Puntland are presided over by the Somali Federal ministry of education.