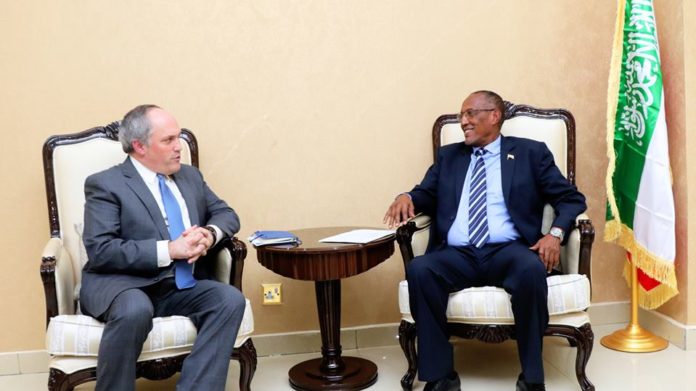 Hargeisa- The President H.E. Musa Bihi Abdi received in his office Dr. Michael Rubin, an American Enterprise Institute Resident Scholar and a foreign policy and defense professor, who paid him a courtesy call.

A press release from the Presidency said that the Head of State thanked the international scholar of repute for advancing Somaliland’s cause by numerously putting SL in the world map through his articles of righteous lobbies.

The scholar has on many occasions written items published in reputable institutions about the aspirations of the people of Somaliland, its achievements so far as a nation and its legal rights are concerned and to see to it its terminations be realized through recognition.

Prof. Rubin is expected to tons various institutions in the country especially places of higher tertiary learning. Individuals of high repute like Rubin has spearheaded SL’s cause in the past such as Prof. D.Shin, Prof. D.Kim, M.Briden, Koigi wa Wamwere etc. (See herein below a paper by Michael Rubin appearing in Washington Examiner recently).

Who is Dr. Michael Rubin?

Michael Rubin is a resident scholar at the American Enterprise Institute, where he researches Arab politics, the Gulf Cooperation Council, Iran, Iraq, the Kurds, terrorism, and Turkey. He concurrently teaches classes on terrorism for the FBI and on security, politics, religion, and history for US and NATO military units.

A former Pentagon official, Dr. Rubin has lived in post-revolution Iran, Yemen, and both pre- and postwar Iraq, and he spent time with the Taliban before 9/11. He is the author, coauthor, and coeditor of several books exploring Iranian history, American diplomacy, Kurdish studies, and Shi’ite politics, including “Kurdistan Rising” (AEI Press, 2016), “Dancing with the Devil: The Perils of Engaging Rogue Regimes” (Encounter Books, 2014); and “Eternal Iran: Continuity and Chaos” (Palgrave, 2005). Between 2004 and 2009, he was editor of the Middle East Quarterly. He has received fellowships from the Council on Foreign Relations,[3] and the Carnegie Council for Ethics in International Affairs.

Rubin has lectured in history at Yale University, Hebrew University, Johns Hopkins University, and worked as visiting lecturer at Universities of Sulaymaniyah, Salahuddin, and Duhok, in the Kurdistan Region of Iraq. Between 2002 and 2004, Rubin worked as a country director for Iran and Iraq in the Office of the Secretary of Defense, from which he was seconded to the Coalition Provisional Authority in Iraq.[4] Rubin currently teaches senior U.S. Army, U.S. Marine, and U.S. Navy leadership prior to their deployment to Iraq, the Persian Gulf, and Afghanistan.[5]

Dr. Rubin has a Ph.D. and an M.A. in history from Yale University, where he also obtained a B.S. in biology.