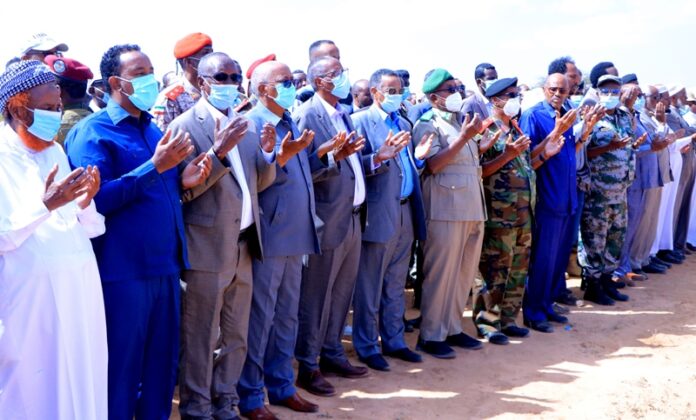 The President H.E. Musa Bihi Abdi led multitude of mourners in a state burial held for the late Omer Arte Qalib, an intellectual politician who played a major role in the shaping up of earlier Somalia politics in a time spanning four decades since the sixties.

The Head of State gave a passionate eulogy of the late Arte at the graveyard on Thursday the 19th Nov, 2020.

The President was flanked by his deputy, several cabinet ministers, service commanders, politicians, several eminent personalities and senior civil servants amongst members of the public.

He pointed out that the late Arte left a hallmark of political integrity note in Somali’s history when he was part of the forefront leaders who stood up to dictator Siad Barre when the latter’s tendency in leadership swayed away from integral righteousness.

The President said that while teaming up with Ismail Ali Abokor the late Arte cut out a special niche of his part in history.

He noted that Arte’s exemplary political acumen was first fathomed in 1960, when he fronted for the delaying of the Somaliland’s national Independence as per the British colonial wish and not join Somalia (Italian) immediately.

He gave a re-cup of the prominent history of the deceased from the time he was Hargeisa’s District Commissioner who saw to it that the poor and vulnerable were housed up to the time he was sentenced to death for subversion.

He pointed out that the late Saudi King Faisal was a personal friend of Arte, hence the late Arte, against all odds managed to lead Somalia to the Arab League fraternity hence borne as a bonifide member.

The President reminded the mourners that in the long run when the Siad Barre regime caved in and the dictator was bolting, the whole of the Somali nation’s elite personalities beseeched the late Arte to lead the country hence was named the Prime Minister (known as the  ‘manifesto’).

It is worth noting that he is the one who called upon, through an order, to the Somaliland based Somalia government forces to lay down arms- something that changed the course of the history of the region.

The late Arte who was multilingual and intellectual of notable repute was accorded the special state burial in which his casket was carried by uniformed military personnel.

The President sent his condolences to the family, relatives and friends of the deceased and wished them steadfastness and strong faith in the trying moment.

In the same breath and at the same venue, the Head of State sent similar condolences on the demise of sultan Mohamed Mohamoud Handule (Inda’ase)- who was buried in the same day at the same graveyard in the city- and Dr Adan Yusuf Abokor; the latter just passed away in Turkey, while undergoing treatment, hence was a former jailed member of the celebrated UFFO activists.

The President prayed for the souls of the trio to rest in eternal peace.