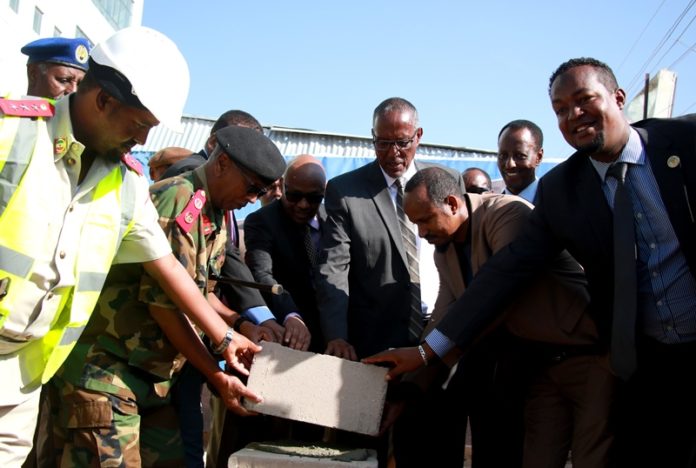 The Head of State, H.E. President Musa Bihi Abdi laid a deserved historic foundation stone for the proposed National Museum Complex that is indeed a milestone and will go a long way to conserve the not only multi-centuries but multi-millennia-old rich cultural and associated facts.

He similarly innaugarated the new headquarters of the national tender commission  and a vast store for national relief services and urged the city chiefs to serve the residents in a better way..

The complex which ought to have been established eons ago has already gone down well with pundits and populace alike hence greatly hailed.

The museum is to be set up and constructed at a juncture which has a long history hence numerous and is a point hich numerous national historic functions has been held at different times.

Similarly, past national monuments destroyed by the by-gone military regimes used to be at this point.

While laying the foundation stone yesterday morning, the President passionately appealed to Somalilanders to shun tribalism and instead advance patriotism as the nation endeavours to achieve development in every corner of the country.

The Head of State reminded Somalilanders that it is this region that was indeed the cradle of the pharaohs hence the rich traditional and thousands of years old art depictions spoke for themselves.

While supporting and praising other private but small museums already established, the president underscored the importance of having such institutions being established in the country saying that they would act as a point of reference monumental treasures for posterity cherishing the history of their land.

Meanwhile the President on the same day inaugurated the gigantic food storage stores at the National Emergency Preparedness Agency and Food Storage Centre and also the new headquarters of the National Tender Commission.

He hailed both institutions for the impeccable manner they renderedtheir services to the country and urged them to continue serving the populace.

The President in a veiled warning to the city chiefs cautioned the Mayor and Hargeisa Municipality that the outcry of the city residents of lack of better services has soared. He urged them to be more diligent in their duties.

In a long speech that the Head of State gave at the venue, the president decried the clannish and tribal culture that has taken root hence warned that unless the mindset was changed there was no tangible progress that can be palpitated at all.

He underpinned the importance and strategic services the National Emergency stores would have in addresing shortfalls during the famine.

He was received at the premises by the National Emergency Preparedness Agency and Food Storage Centre CEO Mr. Feisal Ali Sheikh who gave a recap of their duties to the nation especially during the SAGAR CYCLONE SETBACKS.