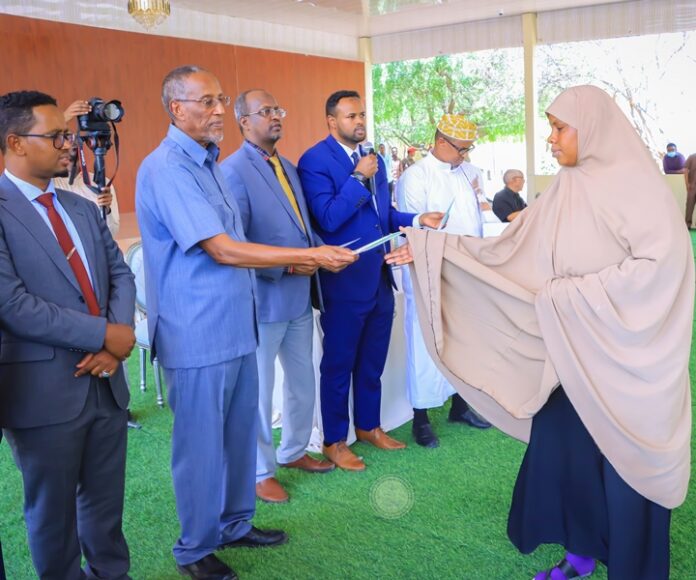 The President H.E. Muse Bihi Abdi has unveiled programme in which 988 small business people and vendors who had their merchandize perish in the recent Waheen blaze were being compensated.

The Head of State who was flanked by his deputies the VP H.E. Abdirahman Abdillahi Ismael Seyli’i presided a function that saw $500 and above being given to the affected.

Those who attended alms giving session were amongst others several members of the cabinet led by the religion and endowment minister, the National Chamber of Commerce chair, Mr. Jamal Aideed, the Head of the Waheen Market Association, Hargeisa Deputy Mayor Cllr. Khadar Ahmed and the merchant’s fraternity.

The Head of State thanked the emergency disaster relief committee charged with the Waheen blaze issues for their diligence in addressing the clean-up works going on of the ruins.

He urged the members of the public to work closely with the committee and whatever material or moral support should be channeled appropriately. Accounts were opened to channel funds through.

He equally called upon the people to refrain from anything that could slow, hinder, impede or constrict the functions of the disaster relief committee.

The President noted that the first phase of compensatory alms-giving action has the committee working in conjunction with the government hence have had an agreement that those whose reserve were less than $100 will be given $500 and those whose stock were less than $5000 were to be fully compensated.

He pointed out that the alms came from the people and had to be returned to the affected individuals.

The president personally gave to 30 amongst them. The remaining 958 were compensated electronically by the central Bank Governor Eng. Ali Abdillahi.

Some of the recipients who were given the chance to speak at the function exhibited emotion as they thanked the government profoundly.

The chamber of Commerce chief noted that they had carefully chosen the deservedly affected ones in a painstaking manner.

The deputy Mayor lauded the efforts of both the committee and the government.

In a recap of the situation, the religious and endowment minister who is the disaster relief emergency committee chair spoke at length on the efforts they have addressed and already done to date.