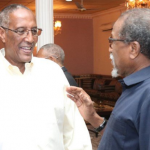 This is the first meeting that incumbent president Musa Bihi Abdi has held with Khatumo leader since his election victory to the presidency.

The six point agreement between the government of Somaliland and Khatumo was supposed to be carried out by the incumbent president Musa Bihi Abdi.

Although Bihi is intransigent despite calls for the immediate implementation of the accord.

The points that Ali Khalif Galeyr is putting a lot of pressure for implementation by the government is the opening of the country’s national constitution for amendment in a bid to review the power sharing process among clans residing in the greater Somaliland on the basis of justice and equality.

Another key point in the agreement between Khatumo and Somaliland government is that both sides should cooperate in an attempt to convince UN agencies and Int’l organizations to start operating in Sool, Sanaag and Buhodle regions which have been ravaged by recurring civil wars.

The eastern regions in Somaliland are lagging behind the rest of the provinces in the country in terms of peacebuilding and the implementation of development projects.

Professor Ali Khalif Galeyr has been stationed in the capital Hargeisa ever since President Bihi’s election victory in 2017 and on various stages have called on the government to honor the agreements of the peace deal and further urged on the govt for implementations. 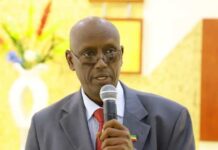