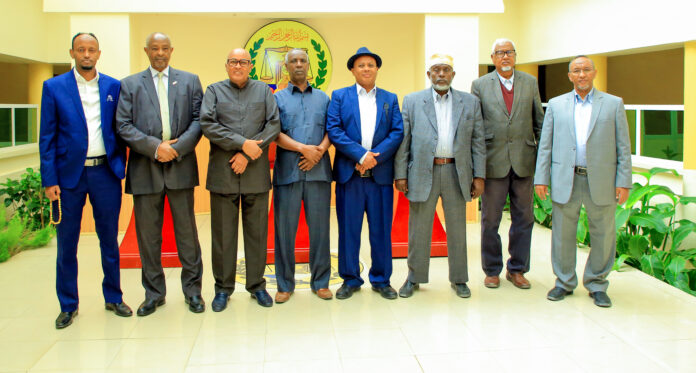 Somaliland’s three national political parties have on Sunday fully supported the National Electoral Commission for fixing a date for the upcoming local council and parliamentary elections to take place in Somaliland.

NEC met with SL president Musa Bihi Abdi together with the Vice President, Abdirahman Sayli’i at the presidency yesterday and announced that election will take place in the country on 31st May, 2021.

The three political parties, namely UCID, Kulmiye & Wadani have also sent a clear meassage to the House of Elders which has got the prerogative right to fix a date for holding polls in the country.

The three political parties said that they are in support of the announcement made by NEC after having held talks with president Musa along with the VP.

First of all, the acting Secretary General of Justice & Welfare party (UCID), Yusuf Osman  Qodah, has said that the three political parties have fully endorsed the date announced by NEC to hold parliament and local council polls in Somaliland.

He urged  the Guurti to give a priority to the date which the political parties along with NEC have supported.

Acting Wadani party chairman, Abdikadir Jirde, has wholeheartedly congratulated on the efforts by NEC together with the gov’t to hold elections.

He said: ” The public is tired of election delay. He called on the House of elders to see eye to eye with NEC on the date fixed for the polls to take place in the country. He sent congratulations to NEC, the gov’t and elders who played a crucial role in the VR exercise.”

Second Deputy Chairman of Kulmiye and the interior minister, Mohamed Kahin Ahmed, has underlined that the political parties endorsed the date issued by NEC.

He called on the Guurti to heed the calls from the parties in a bid to prevent election delay.