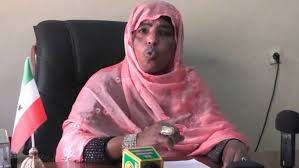 Shukri Harir Ismail, a pioneering leader in local community based organizations and a major figure in the media industry has passed on.

The Late shukri Harir, who happened to be a-who-is-who face in Somaliland’s media industry having made a major impact in the country’s scribes fraternity, was laid to rest yesterday, Saturday the 16th of January, 2021, having passed away on the same day in Hargeisa.

Leading the mourners upon her burial was amongst others, the Minister of Roads Development Hon Abbdillahi Abokor.

According to SOLNA Director Omar Mohamed Farah, who was amongst the mourners at the heroine sendoff of the late Shukri Harir, told the THT that several deputy ministers, over two dozen upper and lower parliamentary representatives, numerous eminent personalities from traditional, entrepreneur, community based organizations and youth fraternities were quite visible from the hundreds of multitude of mourners at the graveyard.

He noted that her epitaphs were cited by various personalities who echoed the monumental tasks achievements in her life time.

She joined the media fraternity four decades ago, and continued working in the industry despite being amongst those who formed the earliest local NGO’s hence busy working in juxtaposition with the CBOs diligently.

The late Shukri happened to be the first ever female broadcaster to ever work at Hargeisa radio station.

Having reached the epitome of her working life to become a cabinet member, she served as an assistant minister at both Family Affairs and Information ministries, having earlier climbed through the ranks at several departments of the information, culture and national guidance.

The late Shukri who is survived by her children, was amongst the few handful of women who ever reached the level of holding a cabinet portfolio in the history of the land.

The President H.E. Musa Bihi Abdi had immediately sent a note of condolence upon hearing about her death, hence outlined the notable role she had played in the country’s development.