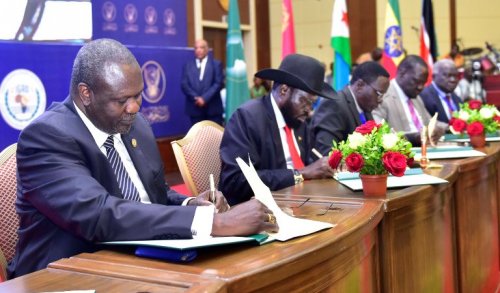 August 6, 2018 (JUBA) – The opposition People’s Democratic Movement (PDM) rejected the agreement on the outstanding issues on governance and power-sharing signed by the South Sudanese parties including the South Sudan Opposition Alliance (SSOA).

In an email sent to Sudan Tribune late on 5 August after the signing ceremony, PDM leader Hakim Dario recalled their position of 18 July on the governance agreement and stressed that the “PDM did not sign the agreement on 5th August 2018”.

In its statement of 18 July, the opposition group stressed they call for a “Federal Governance during the transitional period, based on three (3) autonomous regions with their borders of the three provinces of Upper Nile, Equatoria and Bahr al-Ghazal as they stood on 1st January 1956”.

The PDM further stressed that the power-sharing should allocate 33.33% for each of the three regions and do not allot power to “to political elites and their movements by a stroke of a pen”.

The SSOA which had rejected the deal on the outstanding issues of governance changed its mind and signed the agreement “for the sake of peace” as it was stated by its leaders.

Their main reservations were on the power-sharing at the state and local governance level and the organization of a referendum to resolve the issue of the contested 32 states.

For the SSOA, the reestablishment of the three old regions was one among three options they proposed as an alternative for the referendum.

In addition, the PDM said the SSOA has no authority to sign on behalf of the Movement pointing that every group should sign the deal on their own behalf individually.

“Mr Gabriel Changson Chang has no authority of SSOA to sign the Khartoum Agreement on Outstanding Issues of Governance on behalf of SSOA,” said the PDM.