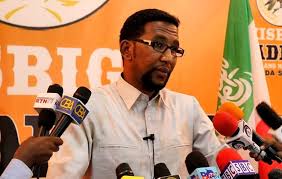 As the people of Somaliland have vocally rejected the request of president Farmaajo to visit Somaliland, The opposition party Waddani called on President Muse Bihi to come out of hiding and face the nation.

This call comes after twenty-four hours in which the public opinion was gripped by the proposed joint visit to Somaliland by Ethiopia’s prime minister Abiy Ahmed and Somalia’s president,  Mohamed Abdullahi Farmajo.

Barkhad Jama Batun, the spokesman of Waddani party, today called on president Bihi to come out of hiding and beg forgiveness from the people. Barkhad did not say the wrongdoing for which the president should apologize. .

However, he said the people of Somaliland have been looking for the president for the past two days.

Waddani party has called on the government for more transparency on multiple occasions since the last week’s meeting between president Bihi and his Somalia counterpart, Farmaajo. The party’s chairman and secretary-general had both demanded more information on the meeting in Addis Ababa.

Barkhad Jama Batun, on the other hand, commended the people of Somaliland for their response to what he called the assault on their sovereignty and unity. He urged them to closely follow the president’s annual speech to the parliament set for Tuesday.