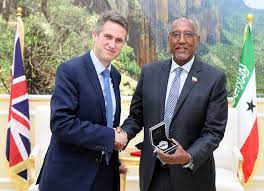 Members of House of Commons have called on UK gov’t to officially recognize Somaliland as an independent country.

The MP’s have also urged their government to honor the rights and freedom of Somaliland nationals to be a sovereign nation.

The recent successive free and fair elections held in Somaliland were the most important issues in the debate on Somaliland’s recognition at the House of Commons.

Mr. Gavin Williamson, the former UK defense secretary who is a member of the House of Commons has tabled the proposal before the UK parliament.

Mr. Gavin reiterated that it is the right time for the UK government to be the first country to recognize Somaliland.

He reminded the UK government needed help and had responded by sending their young men to defend British values and freedoms. Gavin Williamson believes the UK government should revisit its foreign policy pertaining to Somaliland’s recognition.

The UK government said that it’s up to Somaliland and Somalia to decide their future relations -but- Rushanaara Ali opposed the government decision and made intervention stating that the UK government should not be asking Somaliland to seek approval from Somalia for its independence, drawing parallels between Bangladesh independence from Pakistan, and Britain’s role in supporting them to become an independent state.