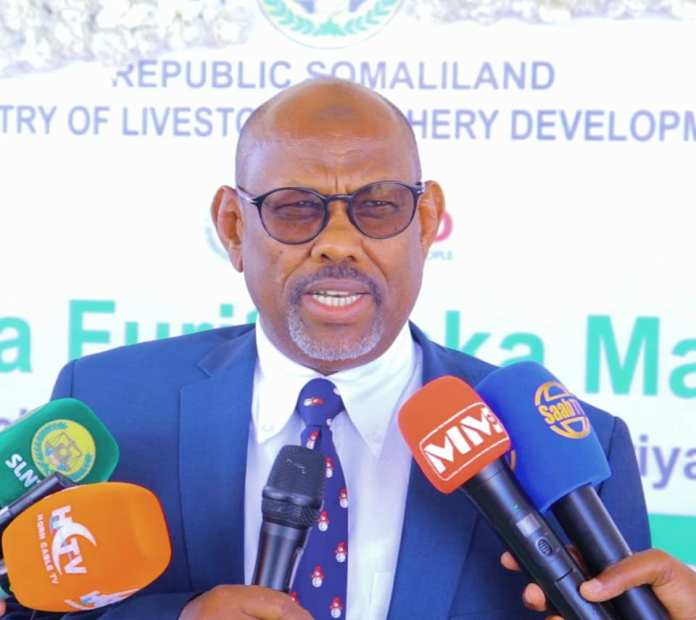 The Minister of Livestock and Fisheries Development Hon. Said Sulub Mohamed has officially launched a veterinary treatment campaign that will be undertaken throughout the regions of the country.

Speaking at the meeting, the Deputy Minister Hon. Erub A. Ahmed thanked the FAO for its support in veterinary care and said that animals get diseases as humans, and severe drought in the country exacerbates the malaise.

The task of sending teams by the ministry is treating all sick animals, malnourished animals are given supplementary medicine. An official for the Food and Agriculture Organization of the United Nations (FAO) said that in response to the drought, it was important to take care of animals affected by drought and disease, as well as provide nutrition for the malnourished.

He said the FAO is working closely with the Ministry of livestock and will continue the drought response project.

The Director General of Livestock  Dr. Ahmed A. Mah said that the veterinary treatment is the responsibility of the ministry. The importance of this operation is to address the impact of the drought on our livestock, as they become weak and in need of treatment and nutrition.

He urged the pastoralist community to work with incoming veterinarians.

Minister of Livestock Hon. Said Sulub, who launched the veterinary field services response, said up to five million animals would benefit, with 320 veterinarians performing the task.

The Ministry informed the pastoralist community to take advantage of the Ministry’s veterinary teams reaching upto their doorsteps to treat their livestock.