History seemed to be repeating itself in Galkayo on 7 October 2016.

On that day, armed forces from the federal member states of Puntland and Galmudug clashed in the Garsoor area of the historically divided city, which straddles the border separating the two states.

A new agreement was signed by the presidents of Puntland and Galmudug states on 1 January 2017, and one of its three main provisions called for the introduction of joint police training in the city of 270,000.

Two hundred Galmudug and Puntland police were subsequently trained and deployed in Galkayo after completing training facilitated by the UN Assistance Mission in Somalia and the African Union Mission in Somalia. Their presence and operations have helped prevent any serious outbreak of fighting since the establishment of the Joint Police Patrol Unit in August 2017.

The formation of the joint police unit has also spurred a greater sense of unity among the residents of a city that is claimed by both federal member states.

“The joint police patrols have acted as a bridge between people in the two sections of the city,” said Col. Jama Mohamed Amed, the commander of the unit. That view is echoed by the mayor of the portion of Galkayo inside Galmudug state.

“In the past, it was so difficult to move between the two zones of the city,” said Hersi Yusuf Barre. “But people today move easily without fear, and members of the community like women and youths conduct their regular meetings in each zone of Galkayo during the day and also at night.”

Members of the joint patrol unit were instrumental in preventing a major outbreak of violence last year when two armed groups clashed in the city’s main market that sits astride the Galmudug-Puntland border.

One policeman and a clan elder died in the shooting, but the timely intervention of joint patrol unit personnel averted a serious escalation in the fighting.

The Joint Police Patrol Unit has been generously supported by a range of projects funded by the European Union, Germany, United Kingdom and Qatar. 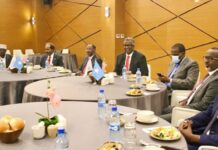 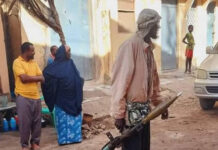