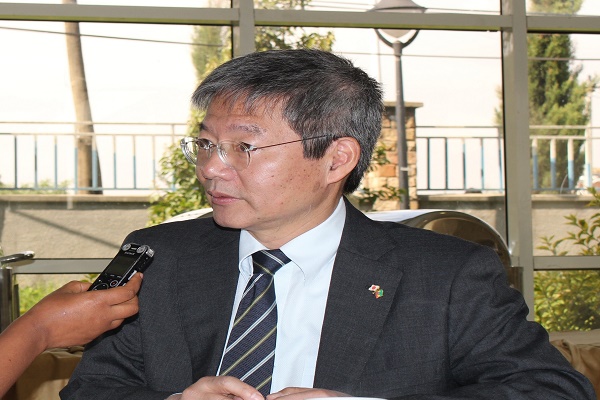 “We wholeheartedly support the reform efforts by the new Prime Minister Abiy Ahmed, I hope his reform efforts will be consolidated and take root in the society and economy,” he said.

Referring to some of reform measures undertaken by the government of Ethiopia such as ensuring gender parity in the cabinet and appointing women for Head of State and Chief Judge of the Supreme Court, he said that his government looks this as a great positive development.

He elaborated that lots of countries have to follow Ethiopia’s path in creating gender balanced democratic state, adding that “Ethiopia is a very good example and model for women’s active participation in government affairs and higher public positions,” he said.

Speaking about investment opportunities in Ethiopia the ambassador said that Ethiopia is becoming very hopeful and promising investment destination in Africa.

He noted that the government of Japan witnessed encouraging double digit economic growth in Ethiopia over the past two decades.

Furthermore, Japan is planning to cooperate with Ethiopia in its shortage of foreign exchange, as Ethiopia should not be tied down with financial difficulties, he revealed.

“Japan itself was in a same situation immediately after the World War II, Japan had acute foreign exchange shortage, but we are able to overcome such difficulties, and hopefully Ethiopia will able to overcome the difficulties and bring prosperity to the nation,” he added.

In the meantime, he added, Japanese government commended Ethiopia and Eritrea for their commitment of putting an end to the long years border conflict.

He noted that the government of Ethiopian is making tremendous efforts in conflict management by contributing the world’s largest number of troops to United Nations peace keeping missions and AMISOM.

Japan and Ethiopia have established diplomatic relations since the 1930s.