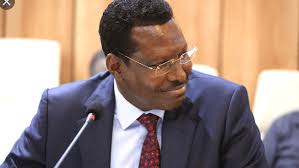 Galmudug State President of Somalia, Ahmed Abdi Kariye has appointed a list of 23 cabinet on Thursday.

Two females have been included in the cabinet. Former National Intelligence Chief Ahmed Fiqi, a very outspoken opposition politician named as the minister of security.

At least dozen opposition figures have been included in Qorqor’s new cabinet.

Sabir Nur Safiye, an opposition politician who is allied to (UPD) Party will take charge of ports portfolio.

Both Sabir and Fiqi are members of Somalia’s Federal Parliament.

The new cabinet appointed by Qorqor is awaiting for Galmudug parliament’s approval.