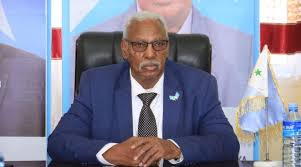 Galmudug regional state president, Ahmed Ducale Gelleh Haaf , on Sunday has fired the minister in charge of planning and International relations. This was disclosed in a decree from the office of the President that the minister, Mr. Abdi Kafi Mohamed Mohamud has been relived from all his duties. The minister for state was delegated to the duties of the sacked minister, the official statement said. The reason for sacking the minister was not cited in the decree but it is learnt that he spoke of possible split of Galmudug reconciliation committee into two camps.