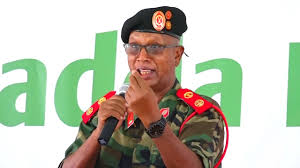 Major General Nouh Ismail Tani, the chief of the National Army, downplayed defects in his army. In last week military officers from Somaliland National Army defecated to Puntland administration. The defected officers were stationed in eastern Sanaag region. “They were receiving salaries and were doing nothing for the country. They have never get involved in any military operation,” Nouh Tani said in a press conference held at his office. “The people ask questions when they see military leaving. These soldiers were based on their communities and they were not doing anything. They were just receiving taxpayers’ money,” he argued. Referring to the recent defections, he said “we asked them to move to Badhan, but they refused and said they have an agreement with Puntland not to attack one another,” Major General Tani said. In last week Badhan was taken over by Puntland. Media reports have shown Somaliland military station handed over by defected officers to Puntland.

I am glad they left, he said. The general made the most serious allegations against Colonel Saed Awil Jama (known as Col Aare). Aare who was a colonel in the National Army left the government forces and formed an armed group to fight against the government of Somaliland. In the beginning, he started a base in the neighbouring Puntland administration of Somalia, but currently, his militias are stationed in mountainous ranges west of Erigavo, the administrative capital of Sanaag region. “Aare should be executed for the murders he committed. He murdered at least ten people,” General Tani said. Elders from the clan of the colonel are working to mediate in an attempt to avert bloodshed. Aare said he accepted the mediation of the elders, a cease-fire and to engage in talks with the government of Somaliland. But the military chief said “those who are advocating for him are wrong. He should be prosecuted and brought to court for the crimes he committed. I am telling you he is a criminal.” The strongly-worded message from the military chief may disrupt the ongoing negotiations aimed to resolve the dispute peacefully. Aare’s militia is located in tmountains not far from Erigavo.