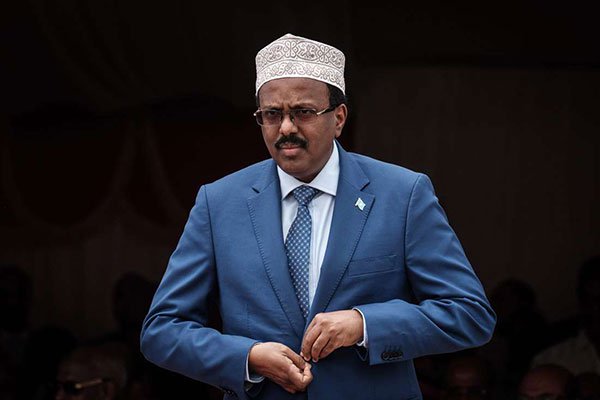 Somalia President Mohamed Abdullahi Farmajo has had mixed success in the past two years, but has earned a fair score in the mid-term assessment, compared with his predecessors.

Since his election on February 8, 2017, President Farmajo has performed well on economic recovery and has mobilised the public behind the government in a way that previous administrations were unable to.

But his score on national security is very low, with the jury is still out on the fight against corruption, according to the latest policy briefing by the Heritage Institute for Policy Studies, a non-profit organisation based in Mogadishu.

The institute says that the Farmajo administration’s delivery on what it presented at the May 2017 London Conference is far below expectations, taking into account that the government is operating in an extraordinarily complex environment combined with meagre resources.

The institute judged President Farmajo based on the four pillars he presented at the London Donors Conference in May 2017— improved security, political stability, a revived economy, reduced corruption and positive engagement with the international community.

The report says that together with Prime Minister Hassan Ali Khaire, Farmajo’s administration has made sustained progress on the debt relief process, robustly re-engaged with international financial institutions, increased revenues and maintained public confidence and unity of purpose among the government’s executive branch — the president and the prime minister.

The Farmajo government has accelerated the process of debt relief and in two years, it has managed to successfully pass the third Staff Monitoring Programme, a technical process with the International Monetary Fund intended to whip poor countries into a strict financial management and economic development regime.

Mogadishu has managed to win the confidence of the European Union, which is providing direct budgetary support for the first time in decades.

The country is also on track to secure its first concessional loan from the World Bank within the Highly Indebted Poor Countries process.

Farmajo has also expanded domestic revenue and increased government income by 20 percent over the past two years. And more so, the Finance Ministry has been effective in keeping the public informed about income trends by putting the entire budget online.

But this according to the institute, is where the success ends. The reports says that the decision by the government to sack the Parliamentary Finance and Planning Committee after it alleged that $42 million was missing directly contradicting with the administration’s claim of fighting corruption.

The biggest challenge comes in the political inclusion in which the government promised a system of inclusive and stable politics that included a review of the provisional constitution; deepening the federal system; and designing an electoral system that results in one person, one vote.

But overall, there is no rapport between the member states and the FGS, and the relationship has been exceedingly toxic in certain regions, particularly Galmudug and Jubbaland.