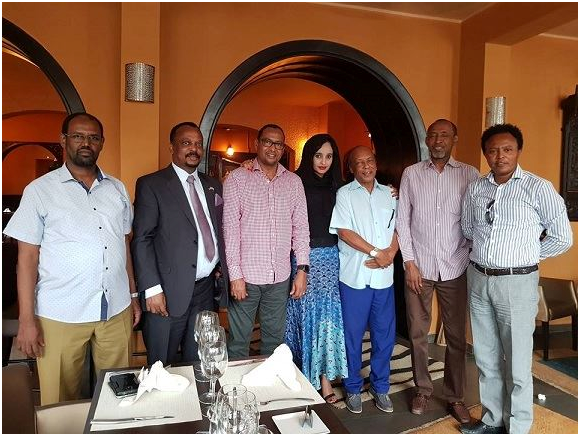 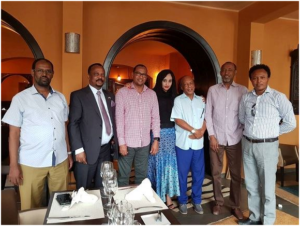 If you hear a 30 years old girl has completed her PHD the highest academic awards by varsities how would you react? Do not worry the answer lies below….

Some days back I accidentally pumped into Mrs. Moha Farah Jire  in Hargeisa, the last time I had physically seen her was six years  ago. This young energetic and visionary lady was teeming with joy.

She said “All praise and thanks are to Allah the almighty all powerful. I have just returned to the country thanks to an invitation by the Ethiopian consulate in Somaliland which has honored me to be their guest. I shall forever been indebted to the Ethiopia envoy to Somaliland Mr.Berhe Tesfay and the consulate staff. The consular general welcomed me heartedly and I thank him for improving the brotherly relationship between Somaliland and Ethiopia which has improved tremendously as a result of consular Berhe tirelessness.”Dr.Moha stated

Dr. Moha was also received a warm reception in Djibouti whereby the Djibouti ambassador to Somalia Dr.Aden Belelo who is also her husband honored her. Present in the Djibouti ceremony was the Ethiopian ambassador to Djibouti Mr.Ato Fitamo Shamebo, a Djiboutian legislator Hon.Ali Abdi Farah and prominent Djiboutian businessman Mr.Mohammud Maril and other Ethiopians diplomats honored her.

Dr. Moha was very proud to be in the history spotlight following the historic meeting between Ethiopia new Prime Minister Abiy Ahmed and his Eritrean counterpart Isaias Afwerki after two decades of separation.

“I send my congratulations to the two brotherly people of Ethiopia and Eritrea for burying the hatchet and working together again. People are happy the route the two leaders have taken to reconnect again since conflict blocks every goodwill. Undoubtedly the Eritrean leader arrival to Addis Ababa ushers a new era, Mr. Afwerki was warmly welcomed by PM Abiy Ahmed, luckily I was there to witness the history in the making.” Dr.Moha said.

“I send my ardent congratulation to the Ethiopia’s Prime Minister Abiy Ahmed for his speedy influence in the region and wish him well in his future endavors.” Dr. Moha added.

Dr.Moha started her career as a journalist for Somaliland National Television which saw her display an influential character that spurred her on to the African Union headquarters in Addis Ababa since then she has never looked back.

She praised Somaliland and Ethiopia for forging a new perspective in relationship; since their resurgence. She went on to say that Ethiopia and Somaliland share a good cross border relationship due to similarity of culture of the two countries.

“I send my congratulations to the president elect of Somaliland H.E Musa Bihi Abdi. I urge his cabinet to foster closer cooperation with their Ethiopian counterparts. I also inform Somaliland students to capitalize on the more than 100 scholarship the government of Ethiopia giving Somaliland.”

“On the other hand I humbly ask the president of Somaliland to make sure that Ethiopia/Somaliland relationship endures the taste of time.”

“Mr. President our neighbor Ethiopia should never be ignored and every opportunity should grasped by both hands to further our special relationship.” Mrs.Moha said.

“Moha is back teeming with energy.” a senior Ethiopian diplomat based in Addis Ababa said. “She is dynamic and became the star of the continent with her blend of unique quality of human nature to persevere and not get discouraged or demoralized by circumstances. Indeed she is a tough lady who can withstand the turmoil of the capital of Africa Politics, Addis Ababa.”

Professor Moha revealed that she will be travelling around the region to gauge what has transpired during the five years she was away.

“I’m Very grateful to Ethiopia which invested on my education and today I’m useful to the whole continent of Africa which the expertise I have acquired through my education will become of handy.” Moha reckoned.