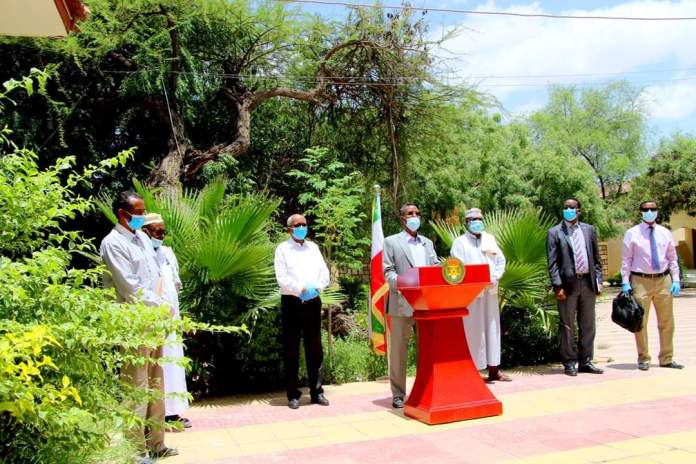 Dahabshiil Group has donated $800,000 Dollars to Somaliland to fight the spread of the novel coronavirus.

Somaliland’s National Taskforce on Covid-19 received the donations from Dahabshiil on Sunday. The deputy Dahabshiil CEO, Mr. Abdirahman Ali Abdi represented the company at the hand over ceremony held at the presidency. Dahabshiil deputy CEO: “Dahabshiil group donation is $600, 000 Dollars worth of medical aid.” The check was received by Abdirahman Abdilahi Ismail Sayli’i, Somaliland Deputy President, who chairs the Taskforce. The company has handed over Covid-19 Laboratory (PCR), to increase Somaliland’s capability to conduct tests locally.

3. 3 ambulances which are well equipped and is expected to be handed over to certain hospitals in the nation. According to deputy Dahabshiil CEO, the company has donated $200, 000 Dollars in cash which will be disbursed to 4,000 households in Somaliland.

Mr. Abdirahman said that Dahabshiil is committed to give back to the society as part of its responsibility. The Deputy President of SL, Abdirahman, thanked Dahabshiil group for this generous donation which will be helpful to the people across the nation.