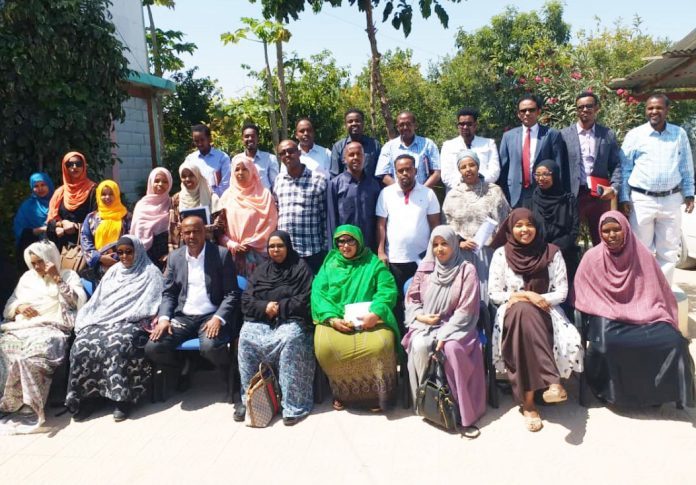 The Somaliland Civil Society Organization (SONSAF) issued a declaration women’s representation in political spheres in Somaliland which this has something to do with appointing women at the executive level. SONSAF speaking on behalf of civil society organizations has submitted the statement to the Head of State

Mr. President
As you aware of Somaliland women played an important role in peacebuilding, state- building, economic development and democratization process of the Republic of Somaliland. Women are the largest voters in Somaliland’s elections and they have extensively contributed the electoral process of the country in general. Despite all of these, Women were underrepresented in Somaliland’s successive governments and particularly your government.

During the last Presidential election campaign, the KULMIYE Party has promised that if the party wins the second term, they will allocate 30% of the cabinet to Somaliland’s women. In addition to that, Mr. President, on 28/12/2015, you have signed a commitment letter with a reference XK/XGX/00421/52/2015, committing yourself to allocate 30% of your cabinet to women if you win the presidency.

Mr. President, after you won the presidency, once again, NAGAAD NETWORK have also submitted a formal letter dated to 3/12/2017 to your office, reminding you the promise and the commitment you made for Somaliland’s women during the election campaign. Notwithstanding, making all these promises, unfortunately, when you announced your Cabinet of Ministers on December 14, 2017, you have given only two Ministers and one deputy Minister to Women. Following the announcement of your cabinet of Ministers, your Excellency Mr. President, Civil Society Organizations in Somaliland, on 15 January 2018 met with you at your office and expressed their concerns about the number of women in your cabinet, but they also requested from you to allocate good number of Director Generals to women, sadly you have named 24 Director Generals and did not include any single women.

Since then, Mr. President you have issued a series of Presidential decrees appointing dozens of Public officials including Governors, Advisors of the President, Chairpersons, and Directors of Government Agencies but again women did not receive what they deserved.

Finally, Mr. President on 16 October 2018, you have appointed officials for 19 different public positions but surprisingly no female was included. Hence, civil society organizations in Somaliland are disappointed how women are excluded from your government, but once again Somaliland Civil Society is calling you to fulfill the promise you made for Somaliland’s women by giving them the honor to serve their country.