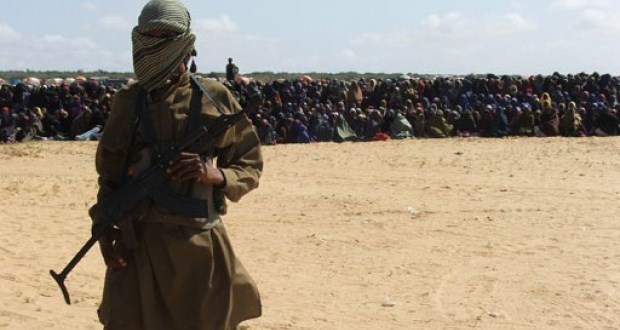 Al-Shabaab court on Wednesday 3rd July 2019 sentenced the five Somali men death penalty on allegation that they were spying the group’s activities on behalf the Federal government of Somalia and its foreign allied partners.

Al-Shabaab which has suffered major losses on their side mainly inflicted by precision airstrikes and successful ground combat ambushes on their training camps and hideouts in various parts of Somalia view that its own fighter leaks the group’s plans to locals who in turn shares the gathered intelligence to Federal government of Somalia and its foreign allied partners prompting the successful operations against the group.

The five Somali men who were executed were identified as follows;

The men were executed by Al-Shabaab firing squad at a public place in Hagar town a stronghold of Al-Shabaab in the Lower Juba region. The reason Al-Shabaab executes people at a public place is to instill fear among its own members and more so to locals against collaborating with government and the foreigner allied forces.

Al-Shabaab has executed more suspects including its own fighters over foreign spying allegations in South and Central Somalia; and especially Kenyan fighters within Al-Shabaab ranks have suffered the brunt of Al-Shabaab spying suspicion and subsequent executions charges on them.