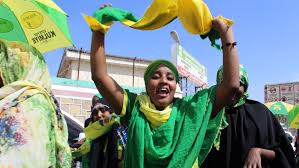 Although Somaliland’s political system incorporates both traditional elements and modern, political structures, it is mostly divided and fought over clan lines, and the two, main political parties represent a specific clan, or a coalition of clans and sub-clans.
“One of the reasons youth are excluded from politics is the clan system, The traditional system was led by old men, so youth and women are still excluded.” Though the most obisticle tackling the youth is the registration because the voter registration was 2016 and it was through one week that is why most of the youth have not registered at that time and there is 10% of Somaliland youth become major after the registration.
Many young people have not registered to vote in presidential elections, and many feel like they are not being properly represented in the political system.
“Young people don’t want to be associated with clan politics anymore,” says the sample of questioner I taked, “and the apathy shows their discontent.”
Yet, several young activists who connect largely via social media are fighting to increase young people’s political participation in Somaliland, in a bid to have their voices heard and improve their life prospects in the country.
Some reports say the formal unemployment rate for youth under 35 is 75 percent, and the rate of literacy is low, at around 44 percent, and even lower for women, at 20 percent.

“Young people need to have serious discussions, we need to network and increase our [political] activity so that we don’t have to face this problem again in the next elections,” says Ahmed Kaare who was youth activist for the last decade.
“Whoever gets elected will become the constitutional president of this country, whether we like it or not. The question is what do we do in those Nine years to change things.”
Young people are not completely absent from politics.
“There was a lot of hope for the youth joining the political system, but those running in the past have not been the right candidates,” explains youth (Dhalinta) and their hope of change. “The clan system does not give a chance to smart, educated youth to get elected and actually improve things.”
But Youth do all agree that the clan system and its elders have had a seminal role in Somaliland’s development, and the republic Somaliland would not be where it is today without it.
Clan elders are widely credited for making – and maintaining – the peace in the critical post-war years, following the civil war to overthrow Siad Barre in the 1980s, and their traditional conflict resolution mechanisms are what enabled the country to reconcile.
“It is elders who bring Somaliland together and keep the peace, but one point here needs to be very clear: clan leaders should not be involved in decision making,” argues most of the youth.
“Involving clan and elders in the mainstream politics is corrupt, it’s rotten, and it’s the old way of doing things. Somaliland as at a crossroads now, we want the political interest to be directed and led by political ambition, by political objectives, not by clan affiliation.”
Confronted with the pressure put on them by organisations Tallo Wadaag and activists like Ahmed Kaare, political officials have had to take notice, and the issues of education, youth unemployment and political participation have been central to the discourse in the run-up to the local Government representatives election also the coming parliamentary elections.
“The country cannot progress if young people don’t participate in the decision-making process,” agrees Hassan Dacad, a representative of the ruling Kulmiye party, which vows to empower young people and increase their political participation.
“We intend to reform our curriculum to focus on technical skills and increase employment, and many positions in our government will be for youth,” Hassan Dacad told me.
Hamse Isse, a representative of the main opposition party, Waddani, told me that, in case of, if they have had the victory, the party would reserve 40 percent of jobs in public institutions for young people.
Whether the political parties will act on their promises after election remains to be seen, but Somaliland’s youth are already taking the necessary steps to ensure they won’t be bystanders in the future, or the present, of their country.
“These old men tell us we are the leaders of the future,” laughs the youth. “But we have to say: ‘No, we are the leaders of now. Now is the time.