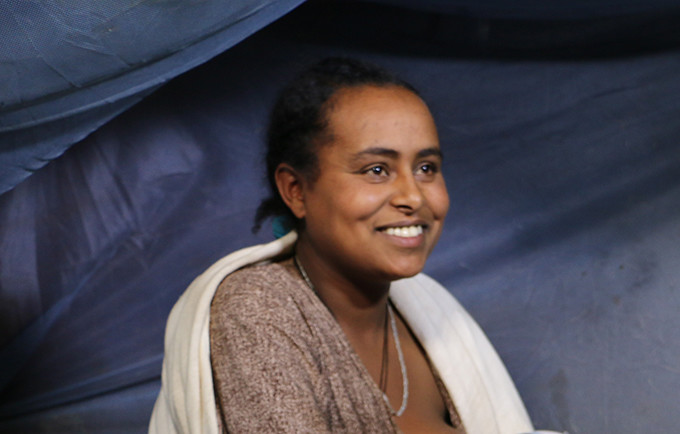 BASOLIBEN, Ethiopia – When Fikre Molla was preparing to have her baby, she wanted the childbirth traditions she had grown up with, but the safety of professional care in a proper health facility.

Yet she lived in Ethiopia’s rural Amhara Region, 31 km from the nearest health centre. For her safety, she spent the weeks leading up to her due date at a UNFPA-supported ‘maternity waiting home’ close to the health centre. Such waiting homes offer nutritious meals, close monitoring by health workers, and quick access to skilled birth attendance when the baby arrives.

But even though she was far from home, she did not have to give up her traditions.

“The community conducted all the traditional practises before and after I gave birth so it felt like home for me,” she told UNFPA, cradling her newborn son, Habtamu.

A traditional coffee ceremony was conducted, and she was able to eat a customary porridge just after the delivery. Family members were also encouraged to gather to celebrate, as they would at home.

Best of all, both mother and baby received the full complement of professional care – including antenatal and safe delivery care, as well as postpartum and newborn services. Fikre also received advice about caring for her new son.

By providing culturally sensitive care, health facilities and maternity waiting homes are increasing the numbers of women who receive proper care before, during and after childbirth – helping to save lives.

Access to health facilities has long been a problem for rural communities. Nearly 60 per cent of rural women report that distance is a major challenge to receiving care, according to a 2016 survey. A great majority of births still take place at home instead of institutional settings.

When complications arise, women delivering without skilled care, or far from hospitals, can face dire consequences.

But things are changing.

Efforts by the Government and health organizations have helped to increase access to skilled providers, such as doctors and midwives. The proportion of births taking place in health facilities, under the care of skilled personnel, has increased from 6 per cent in 2000 to 28 per cent in 2016.

And maternity waiting houses are playing an important role. These homes first entered the scene in Ethiopia four decades ago, but they have only recently been embraced by the Government’s health strategy to reduce maternal and newborn death rates.

Women are encouraged to stay in waiting homes when they are 38 weeks pregnant or more, if they live in areas far from health centres or difficult to reach by ambulance, or if they face pregnancy complications.

“I first heard about the benefits of the maternity waiting home from the health extension workers in my locality,” Fikre said. “Starting from the day I arrived there in my last weeks of my pregnancy, I got all the treatments from health professionals.”

Her waiting home is one of 60 that UNFPA is supporting with essential supplies, including blankets, mattresses, cooking utensils, water containers and coffee-making materials. UNFPA also supports the affiliated maternal health facilities with emergency obstetric and neonatal care supplies.

Communities have been enthusiastic about the waiting homes. The homes are free of charge – often thanks to community contributions, including grains and cash donations that often cover the cost of food and services.

“Community contributions for the maternity waiting homes has been increasing from time to time,” said Binkoye Biyaregelegn, the member of a committee that supports the homes.

The communities benefit, as well.

“We believe that maternity waiting homes will decrease maternal death not only for those pregnant women who live far away but for those living nearby who need follow-up,” said midwife Biniyam Wale, of the Korke Health Centre in Basoiben District, where Fikre delivered.

Fikre is an enthusiastic supporter, too.

“Now, if I come across a pregnant woman, I will inform her about the maternity waiting home,” she told UNFPA, “and tell her that she should stay here for some weeks before her due date to have follow-up care, rest and to deliver safely.”