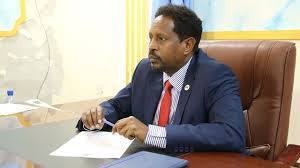 Mogadishu – The United Nations joins Somalia in mourning the tragic passing of the Governor of Benadir Region and Mayor of Mogadishu Abdirahman Omar Osman, known as Engineer Yarisow, from injuries he sustained in a terrorist attack in Mogadishu last week.

“Our deepest condolences and thoughts are with the family, friends and colleagues of Engineer Yarisow, who was long dedicated to helping his country on its path to peace and stability, and meeting the needs of Mogadishu’s most vulnerable,” said the UN Secretary-General’s Special Representative for Somalia, James Swan.

“His life reflected a deep commitment to Somalia and his loss is felt by all of us,” Mr. Swan added. “His work must be continued, and those responsible must be brought to justice.”

Several members of the Mayor’s staff who were injured remain hospitalized following the 24 July attack, and the United Nations renews its wishes for their full and speedy recovery.