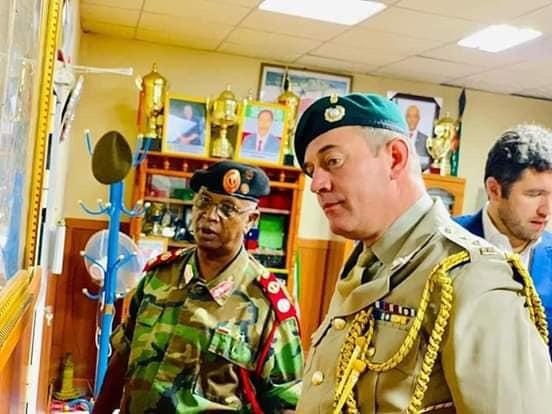 The United Kingdom and Somaliland are seeking ways with which they can partner to improve security in the Horn by building the capacity of the defence forces.

The newly appointed defence attaché at the United Kingdom Embassy for Somalia/Somaliland, Lt Col Huan Davies has been in Somaliland where he held talks with high ranking military personnel of the country and officials of the ministry of defence.

Lieutenant-Colonel Davies met with the Somaliland Defense Minister, Abdiqani Mohamoud Atteeye, and the Army Chief of Staff, Major-General Nouh Tani, with whom he discussed defence matters of mutual concern and the strengthening of ties between the two sides besides an update of progress on programmes implemented.

On the other hand, The Somaliland officials have appreciated UKAID support for defence sector delivered by Axiom and the UK office in Hargeisa.

Axiom International is implementing a capacity building programme in Somaliland on behalf of the UK Government. Ultimately the objective is to increase stability and security in Somaliland.

Sources close to the deliberation stated that the Attaché is following up on several security-related projects the United Kingdom partners with national agencies and security branches which cover defence issues, training, capacity-building, provision of basic supplies indispensable to peace and stability and the rule of law.

Somaliland which remains internationally unrecognized has an army which has played a vital role in the security of the horn of Africa which previously was a hub of pirates.

Somaliland has severally expressed an interest in hosting British and Russian naval bases, which would add to an already active military presence along the coast of the Red Sea – one of the world’s busiest and most strategically important maritime passages.

Russia has also previously announced its intention to set up a naval base in Saylac, Somaliland while the United Arab Emirates is also building a military base in Berbera which includes a coastal-surveillance system.