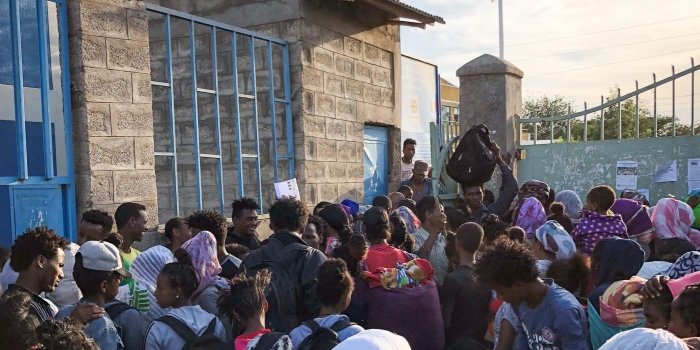 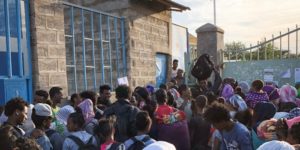 Newly arrived families from Eritrea wait in Endabaguna in Ethiopia during the refugee arrival process. The border finally reopened after being closed for 20 years due to conflict.

Families separated for years enjoy tearful reunions and migrants seek new lives, as over 10,000 people have crossed into Ethiopia since 11 September.

“We’re seeing the fruits of peace one month on from the historic border reopening. Families previously divided by up to 20 years from the conflict, are celebrating joyful reunions. Trade is increasing in the border towns, as more people cross the border every day,” said Stine Paus, Country Director of the Norwegian Refugee Council (NRC).

Some Eritreans crossing into Ethiopia have not seen relatives in over two decades. This led to emotional and tearful scenes, as families separated by years of conflict were finally reunited. Eighty-three per cent of Eritrean arrivals said they had crossed so they could reunite with family members.

“I hugged and kissed them again and again. I was crying so much, I could not control my happiness. Thank God, I don’t have the words to express my happiness. I’m very happy, and I’m enjoying the time with my large family,” said Haregu, a housewife from Gash Barka in Eritrea. After 10 years of separation, she and her husband reunited with their three children and extended family in the Mai Aini refugee camp.

Meanwhile, traffic is also flowing the other direction into Eritrea, as the long-closed border has reopened to commerce. Business is booming for Ethiopian traders and Eritrean visitors, as many vehicles loaded with goods are crossing the border headed for the capital, Asmara.

The border officially reopened on 11 September, with border crossing points at Zalambesa and Rama. The arrival rate from Eritrea has risen sharply, from 53 to 390 people per day. Most arriving families wish to remain in Ethiopia with relatives that preceded them, or plan to reunite with family in Europe, or other countries. Others will return to their homes in Eritrea.

While the border is open for free movement in both directions, the Ethiopian government agency ARRA continues to accept and register those that seek asylum as refugees, with more expected in the coming weeks. Due to the increase in asylum seekers, reception centres have become crowded as arrival numbers have increased. More aid is needed for shelter, food and clean water for the reception centres, and the refugee camps that will accommodate them.