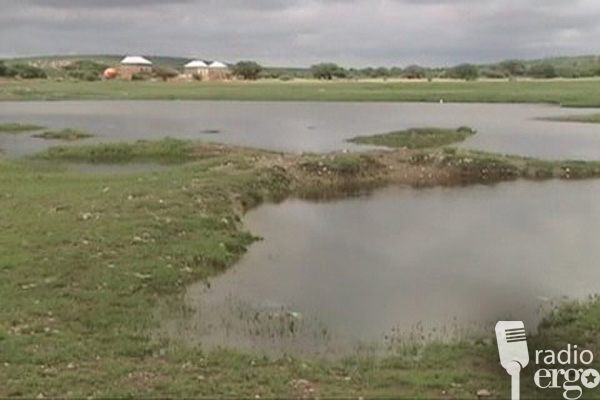 Fadumo Osman is among the 6,000 women and men living in Warta-Burale village in Somaliland who decided they could no longer wait for outside help to solve their agonizing water shortage.

These villagers, around 85 km north of Burao, pitched in with labour and resources to build a dam.

“We used to wake up early in the morning and over 100 people at a time would start working on the dam. Some dug, some removed the soil, some prepared food and water for those working until we completed the dam,” Fadumo said.

The village has no borehole and has suffered water crises for years due to successive droughts.

The digging began in February and now the completed dam is full, after short rainfall earlier this month.

Fadumo Osman, who contributed three of her 25 remaining goats to the project, says they will never have to flee the village in search of water again.

“The reason why I volunteered and gave some of my assets is just to be able to avert water shortages every year. In the last two years, I have moved out of this village three times in search of water,” she said.

Fadumo and her husband and seven children have lived in the village for more than a decade. They had to migrate to Gebogebo village, 65 km away, where there is a borehole with a pump, every time the water ran out.  In the last two years, they have lost 150 goats to the drought.

Nur Jama’a, another villager, told Radio Ergo that he never thought the dream to get a dam in the village would come true. He contributed five goats towards the construction.

Abdi Elmi, a village elder sitting on the dam-building committee, told Radio Ergo that those who had faced water shortage for years joined hands to construct their own dam after several appeals for outside help failed.

The dam is 150 metres long and 150 metres wide, and three metres deep.

“We thank almighty God, we finally completed. The water in the dam is now enough to serve the village for the next eight months,” said Abdi.

He said 100 goats and 10 camels were slaughtered for those building the dam.  All animals were contributed by the locals.

Abdi told Radio Ergo that prior to the construction of the dam, the residents used to buy a barrel of water for $4 from water tankers fetching water from Bura’o town. The area has only two privately owned reservoirs.