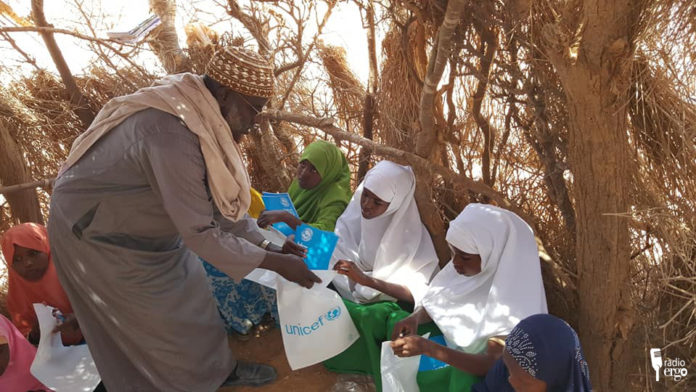 For the first time in her life, 11-year-old Saynab Farah Mohamed wakes up every day to go to school instead of herding her family’s livestock.

Saynab and 49 other children, whose nomadic pastoralist families have been forced from one place to another by successive droughts affecting northern Somalia regions, joined a community school that opened in a remote part of Sanag region last month.

Concerned about the future of their children, the pastoralist communities in Jingad village near Hingalol town joined together to establish a school.

Saynab and other children are taught Somali, mathematics, science and social studies, sitting under a tree.

The lack of facilities does not dim the excitement for Saynab who has never been to school before.

“I started school recently and I want to continue until university to pursue my dream of becoming a doctor,” Saynab told Radio Ergo. “I am very happy to have got this opportunity.”

Saynab now looks forward to another her days, learning instead of doing chores.

Hingalol Education officer, Mursal Saeed Ali, helped the school committee to get some uniforms and exercise books for the children.

Ali told Radio Ergo that the area, which had no schools, is desperate for help from well-wishers.

“The teachers use a chalkboard hung on a tree, they have no classrooms,” said Ali. “We spoke to government but we will have to do what we can to keep it going until we get support.”

Ali appealed to well-wishers to contribute towards building a classroom for the children.

Mohamud Jama, who is one of the two volunteer teachers in the school, told Radio Ergo that concentrating sitting under the moving shade of the tree is hard for the 30 girls and 20 boys.

“It is hot and we are always disturbed by winds carrying dust. We also fear that in future the learning will be interrupted when it rains unless we get classes before then,” the teacher noted.

According to Jama, the class is made up of teenagers and younger children. They cannot be split up because there is no other suitable tree with enough shade.

“I would like to separate the lessons for the groups but we have no alternative.  Sometimes the different groups may have same lessons which creates confusion,” Ali explained.

Twenty new aspiring students have been turned away due to lack of space and learning materials.

“Most of the students are girls.  They feel shy and always want to sit on the outside of the circle of shade. At noon, the shade shrinks forcing the children to squeeze in to a very small space,”Ali said.

Kaltun Dahir Ali, whose family lost all their livestock in recent drought, has three children in the school.

She welcomed the initiative saying it solved her long concern over the lack of education for her children.

“We have a bright future for our children now, we had been lacking a school for them for years,” said Kaltun. “We call upon well-wishers and other agencies to help us get classrooms for our children.”