Members of the House of National Assembly will return from recess for an extraordinary session on Saturday. The parliamentarians will convene in order to approve the newly elected members of the national election commission. An official statement from the house of representatives in Somaliland has apprised the MP’s to attend the important session on the 12th of October. This comes days after the EU envoy to Somalia, Hon. Nicolas Berlanga paid a courtesy call to the parliament and held high level talks with the speaker, Mr. Bashe Mohamed Farah. The two sides discussed speeding up matters pertaining to the preparations of upcoming polls in Somaliland. Mr. Berlanga, the EU ambassador to Somalia played a key role in brokering a deal among the three political parties and ended election uncertainty over NEC impasse. The three political parties in Somaliland signed a landmark agreement that paved the way to put an end to the election squabbles among the three parties. The Head of State appoints two members of the electoral commission. The House of Elders also nominate two others which the constitution gives the power to do so. Each and every one of the three political parties in the country are entitled to name one. 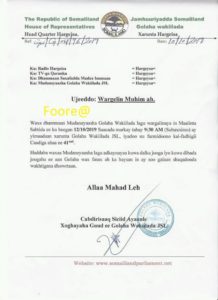