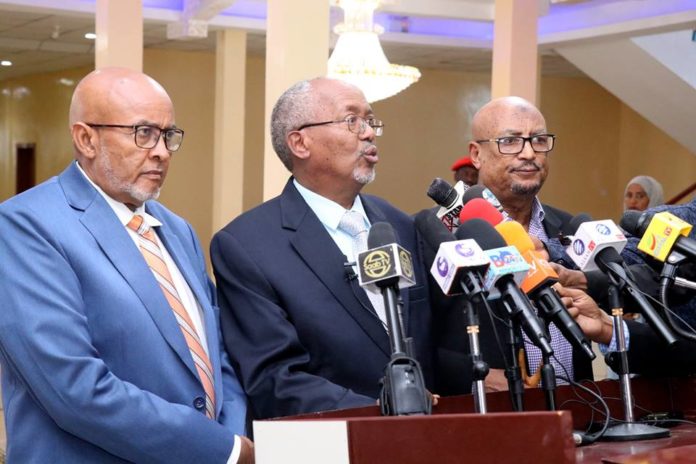 The ruling Kulmiye political party and the opposition one of UCID have released a joint communiqué that announced their agreement to have the expected 19 March 2019 general elections to be held by November of this year.

The five-point press circular at the same time recommends the amendment of the National Electoral Commission laws to the effect of having the number of its council get two additional commissioners.

They similarly concurred to the effect of retaining the present NEC commissioners and going on without Wadani political party’s participation if need be.

The five points ran as follows:-

“UCID and Kulmiye parties have reached an agreement to the effect of having both the forthcoming parliamentary and civic elections be held by November of this year.
Both parties acknowledged the need of retaining the present NEC office bearers since there was no legal statutes addressing their dissolution.
Both parties agreed to the amendment of the General Elections Law 1/20 Article 11 Section1 to increase the new NEC’s (commissioners) numbers to nine officials.
They agreed to the fact that no more setbacks for postponement should arise hence that whether Wadani refuses (due to its demand of dissolving present NEC Commissioners) that the two parties would be ready to participate in the 2019 elections without them.
The parties agreed to front for the integrity and image of Somaliland.
Lastly the parties called upon the upper house of the parliament (the Guurti) to consider the articles of the above mentioned agreement such that they may do the necessary technical changes on the dates.

It is worth mentioning that the Guurti is the only organ charged with the task of changing the dates of elections by effecting postponements following notification by the Head of State.